One of Ali Morrisane's associates. Looks like he's seen a lot of fighting. 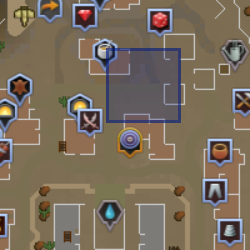 Ali the Guard is a trained guard, recently hired by famed entrepreneur Ali Morrisane. Ali has been hired to protect two small tents and an empty shop on Al Kharid's main street, apparently to prepare for the opening of several news shops.

Until recently, Ali lived in Pollnivneach, a crime-infested city to the far south of Shantay Pass. Although he seems to have been heavily involved in illegal activity, he will not share any further details.

Ali was recently hired by Ali Morrisane, along with a farmer, smith, and tailor, whom he is to guard. Since arriving in Al Kharid, however, the various shopkeepers have yet to open business due to lack of supplies and funding.

Of them, only Ali the Guard has begun his work, protecting the empty houses in the centre of Al Kharid where the shops are eventually to be set up.

Retrieved from "https://runescape.fandom.com/wiki/Ali_the_Guard?oldid=24924487"
Community content is available under CC-BY-SA unless otherwise noted.