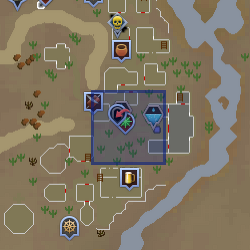 Ali the Mayor is the mayor of Pollnivneach. Although he is mayor of the city, he is helpless against the two warring gangs, the Menaphites and the Bandits, of this town, and cannot take the situation into his own hands by hiring guards to suppress the gangs. This makes him a mayor in name only, as he does not hold any real power.

He plays a small role in The Feud quest. He can be found in front of his expensive house, in the town square of Pollnivneach. During the quest he asks you to help with clearing out the Menaphite thugs and bandits occupying Pollnivneach. Players have to steal some of his wife's jewellery by sneaking into his house on behalf of the town's Menaphite gang in order for the gang to trust the player.

At the end of the quest, it is revealed that the mayor conspired with Ali Morrisane to boost tourism, by getting you to sample the town attractions and meet its inhabitants. Unlike most residents of Pollnivneach, he is not hostile towards the player.

Retrieved from "https://runescape.fandom.com/wiki/Ali_the_Mayor?oldid=24924363"
Community content is available under CC-BY-SA unless otherwise noted.
... more about "Ali the Mayor"
RDF feed
Is members only
Yes +
Store location
Pollnivneach +