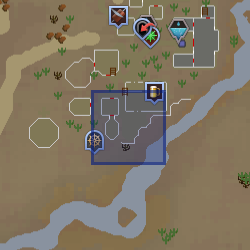 Ali the Snake Charmer is a man who charms snakes outside the south wall of The Asp & Snake Bar in Pollnivneach. If a player puts a coin into the money pot next to him he will graciously give you a Snake charm. He appears to be playing an oboe to a snake. The Snake charm is used in The Feud and Ratcatchers quests. If you rest next to Ali, his music will restore your run energy, acting like the musicians located elsewhere in RuneScape, despite not having a musicians' symbol on the mini-map.

Retrieved from "https://runescape.fandom.com/wiki/Ali_the_Snake_Charmer?oldid=24924244"
Community content is available under CC-BY-SA unless otherwise noted.