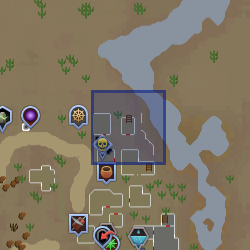 Ali the dyer is a woman on the north side of Pollnivneach who can make red, blue, and yellow dyes if players provide her with the correct materials similarly to Aggie, the witch in Draynor Village who provides the same services. However, Ali is far less popular, as she is in an area not frequently visited by players due to distance between banks. She is in, or just outside, the most north-eastern house.

Ali provides primary colours of dye for 25 coins plus ingredients.

Retrieved from "https://runescape.fandom.com/wiki/Ali_the_dyer?oldid=24924231"
Community content is available under CC-BY-SA unless otherwise noted.