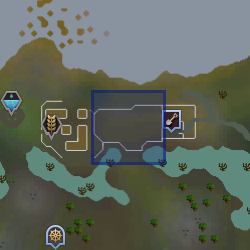 Alice's husband is a ghostly farmer who tends to the undead chickens and cows on the farm west of Port Phasmatys. He was the husband of Alice and the father of Lyra. Despite his deceased status, he still loves his wife, considering her to be clever. One of his cows was called Bessie.

A few years ago, the temple near his farm started glowing, and a few months later he died in his sleep.[1] It also zombified all of his livestock.[2] Despite their relative uselessness, he still gets upset about his livestock being killed and people trespassing on his land.[3]

When an adventurer came to his wife seeking undead chickens, she directed them to him, hoping to find where he'd put their savings and prize cow rosettes. Shortly before he died, he had finally followed her advice and placed their valuables in the bank. However, she couldn't access it without his pass number, which he refused to divulge to the adventurer as he suspected them of scamming. Due to his undead status and her unwillingness to use a ghostspeak amulet, they couldn't communicate, so the adventurer was forced to seek help from a nearby witch. The witch made a special amulet which the ghostly farmer could use to talk with his wife. After Cow1337killr killed Bessie, he began selling undead chickens for 10 ecto-tokens each, saving up to buy killer cows.[4]

Retrieved from "https://runescape.fandom.com/wiki/Alice%27s_husband?oldid=24924105"
Community content is available under CC-BY-SA unless otherwise noted.