RuneScape Wiki
Register
Don't have an account?
Sign In
Advertisement
in: Intermediate quests, Quests, All Fired Up
English

View source
watch 02:52
Roblox: DeepWoken - The Loop
Do you like this video?
Play Sound
This article is about the quest. For the associated minigame, see All Fired Up (minigame).
[view] • [talk]

Over the years, the kingdoms of Asgarnia and Misthalin have become increasingly uncomfortable about the possibility of threats from the Wilderness and Morytania. King Roald has taken matters into his own hands and has commissioned a network of beacons to be built across the land, from the Temple of Paterdomus at the border of Morytania, along the northern borders of Misthalin and Asgarnia and up along the western border of the Wilderness. The communication network is already in place, but King Roald could use a little help making sure everything is ready to go, in the event of emergency....

He tells the player to go see Blaze Sharpeye, who is located at the beacon near Paterdomus and the River Salve, on Silvarea.

) on the minimap and world map.

Speak to Blaze Sharpeye, who tells you about the beacon system, and he has you test the beacons. Players require 20 logs (of any type) and a tinderbox. (They agreed that if it were a real emergency, Gnomish firelighters would be used to colour the flames).

The player should use the logs on the beacon, and then light it on fire with a tinderbox. With the flames ablaze, Blaze tells the player to talk to Squire Fyre. She can be found near the limestone quarry, west of the Odd Old Man, the starting point of the Rag and Bone Man quest. 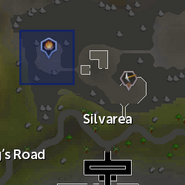 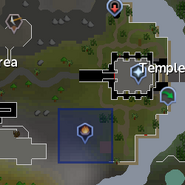 Location of the second beacon

Squire Fyre tells the player to light another beacon near her, after seeing that the first beacon has been lit. This also requires 20 identical Logs (of any type) and a tinderbox.

If you brought a hatchet for the second batch of logs, there are trees spread around the area, south of the Odd Old Man, which you can cut (there are two oak trees to the south-west for faster cutting). Once you obtain 20 logs, go back to Fyre and load the beacon and light it.

After the beacon is lit, go back to Blaze Sharpeye. Blaze Sharpeye confirms that he sees the second beacon lit, and informs that the fire is dying in the first beacon.

Use any kinds of five logs on the first beacon to rekindle the fire. Do not leave yet - talk to Blaze again. This satisfies Blaze, and he tells the player that the beacon network test is successful, and that you should inform King Roald about their victory.

Go back to Varrock Palace, and talk to King Roald for the reward. 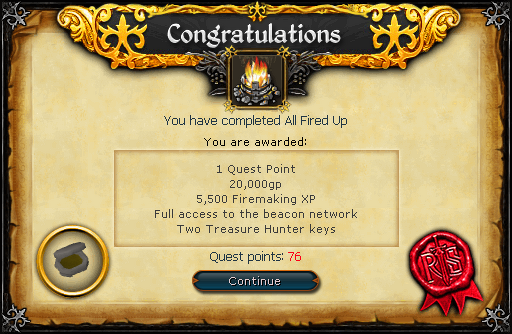 Completion of All Fired Up is required for the following: