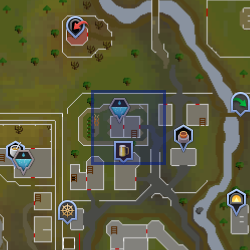 Alrena is a citizen of East Ardougne, the wife of Edmond and the mother of Elena. She lives north of the Flying Horse Inn.

When West Ardougne was quarantined, Elena snuck into the city to help, intending to only be gone a few days.[1] Alrena provided her with a gas mask prepared using dwellberries, intended to help repel the virus.[2] However, three weeks passed with no word from Elena,[1] and Edmond planned to sneak into the city himself to find her.[3] A passing adventurer offered to go in his place, and Alrena prepared some spare gas masks for them, hiding them in case the mourners came by.[4] She later got word to the adventurer that the mourners were becoming suspicious[5] and helped them with locating ingredients for a hangover cure.

She seems to have some skill with medicine, being knowledgeable of the medical benefits of dwellberries and keeping a pestle and mortar nearby.

Retrieved from "https://runescape.fandom.com/wiki/Alrena?oldid=24923201"
Community content is available under CC-BY-SA unless otherwise noted.