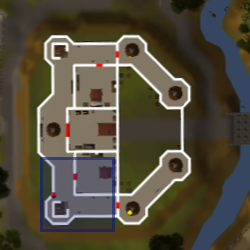 Ambassador Gimblewap is a gnome ambassador found upstairs in East Ardougne palace, just outside King Lathas's room. He is a possible customer for Gnome Restaurant.

Gimblewap is one of many gnome ambassadors recently sent from the Tree Gnome Stronghold to some of Gielinor's larger cities. Like those in Keldagrim, Varrock, and Falador, Gimblewap is attempting to strengthen ties between the gnomes and the other races of Gielinor. This has largely been a success.

As of yet, Gimblewap has been unable to gain an audience with King Lathas, East Ardougne's current ruler. While this could be attributed to King Lathas's busy workload as the king of Kandarin, Ambassador Gimblewap seems to feel differently. He feels that Lathas is deliberately ignoring his requests to insult the gnome race. This is possible, as Lathas seems to have many Zamorakian beliefs, and the Zamorakians have long opposed the gnomes.

Retrieved from "https://runescape.fandom.com/wiki/Ambassador_Gimblewap?oldid=24922657"
Community content is available under CC-BY-SA unless otherwise noted.