RSCOS
This article is about the quest NPC. For the Jagex employee, see Mod Ana.
For the holiday NPC, see Ana (turkey). 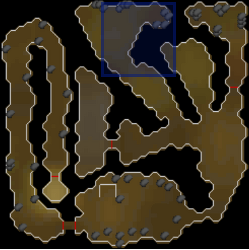 Ana is a girl from Misthalin who likes exploring. Unfortunately, she likes it a little too much, and recently disappeared into the Kharidian Desert. The player meets her mother, Irena, at the beginning of the quest 'The Tourist Trap', in which he or she must rescue Ana. After searching the desert and finding her scarf, the player will discover that she has been captured by the slavers of the Desert Mining Camp. After a series of trials and tricks, the player is able to smuggle her out of the camp by hiding her in a barrel, and thus reuniting Ana with her mother.

At the end of the quest, Irena will do the wave emote and say "Hi Ana!". Then Ana will walk towards her and disappear. Though Ana disappears, Irena stays at the entrance of Shantay Pass, as though she is still waiting for her daughter.