Not to be confused with the Waterfall Dungeon downstream.

The Ancient Cavern is an area reached from the whirlpool near Otto Godblessed's house. Players must dive into the whirlpool to enter the cavern, which contains many high-level monsters, including a high level metal dragon, the mithril dragon, and the slayer master Kuradal.

The cavern can only be accessed after the player has completed the first part of Barbarian Firemaking, requiring level 35 Firemaking. After that, the player must ask Otto about making pyre ships, and then will be granted access to the dungeon in order to fulfil the objectives required to make them. If a player dives into the whirlpool before completing these tasks, they will be swept away, losing a small amount of their life points, eventually washing up on the shore near Hadley's house.

A fairy ring (BJQ) at the western end of the lower level can be restored for use with a spade (tool belt works) and 5 bittercap mushrooms. The player can repair the ring by planting the mushrooms on the "enchanted land" spot near the centre of the ring. After it is restored, players can use it to quickly teleport in and out of the cave.

A follower cannot be taken into the Ancient Cavern by the whirlpool, but instead, one can use the fairy ring to do so.

Players cannot leave the cavern via the whirlpool. Instead, they may leave by riding on one of two aged logs that can be found near the waterfiends, or by teleporting out. The logs are floating on the water, as shown on the map, and have examine text of "A log jammed by the current, perhaps rideable."

The Ancient Cavern is "far too damp" to use a Dwarf multicannon.

The Ancient Cavern is one of the most dangerous dungeons in RuneScape. All who enter the area should be prepared to face dragons with long-range attacks, and high-level monsters that can attack using more than one combat style. None of the monsters in the Ancient Cavern, except skeleton heavy, can be poisoned.

To access the dungeon the player must have learned about funeral pyre burning, in Barbarian Training from Otto Godblessed. To enter the dungeon, the player must jump into the whirlpool off the jetty on the northern shore of the Baxtorian Falls lake. Players cannot jump into the whirlpool with a Summoning familiar. Upon entering the cavern, the player appears on a small platform with stairs to the lower level and can see a mithril dragon off in the distance in another part of the upper level. No creatures on the lower level are visible until the player descends the stairs, so the platform cannot be used for making ranged or magic attacks.

The biggest dangers in the cavern are the brutal green dragons on the lower level and the mithril dragons on the upper level. Players should be prepared to be attacked by a brutal green dragon as soon as they descend the stairs to the lower level, and it can use melee, magic, and dragonfire breath. Inexperienced players can be killed descending the steps if not prepared for dragonfire breath attacks. The Protect from Magic Prayer can help reduce damage as well. The lower level also has many other monsters in various places.

The caves are dangerous, and one should be well prepared before entering the cavern. It is recommended to pack decent combat gear; an anti-dragon shield (or dragonfire shield), antifire (or super antifire) potions, super sets, an emergency (one-click) teleport, and high-healing food. A ring of life may occasionally save players in mortal danger, but the high-hitting monsters have the potential to outright devour players before the ring can activate.

The whirlpool entrance to the Ancient Cavern is south of the Barbarian Outpost near Baxtorian Falls. Players can get there by walking west from Seers' Village, north from East Ardougne, or east from the Tree Gnome Stronghold. (From the stronghold, players with level 37 Agility can take the shortcut northeast of the Grand Tree; otherwise, the more round-about route through the stronghold's southern gate is necessary.)

Some teleports can be used to get near the whirlpool:

Three teleports can be used to directly enter the dungeon:

Map of the cavern

The upper level is split into separate sections. The small northern section is where the player appears after jumping in the whirlpool on the surface world. Stairs #1 connects this section to the lower level. The main part of the upper level can be reached from stairs #2 while the dragon forge chamber can be reached from stairs #3. Stairs #3, the 'rough-hewn steps', once were too slippery to climb until after the While Guthix Sleeps quest was finished, but now can be climbed by anyone in the cavern, giving access to the Slayer Master Kuradal, as well as the entrance to her slayer dungeon. The dragon forge and the mithril door at #4 are discussed below.

"Skeletons" on the map are skeleton warlords. "Barbarians" are confused barbarians. "Spirits" are barbarian spirits.

The location of the monsters on the map is approximate, as they wander about. For example, a skeleton warlord occasionally can be found with the waterfiends.

A total of 12 mithril ore rocks can be found on the upper level. None are safe to mine, as mithril dragons roam throughout the upper level. One Skeleton warlord is also present on this level, in the south-east area.

Fairy ring BJQ can be found at the western edge of the lower level. It must be restored before it can be used, as explained earlier in this article.

Lower-level players sometimes visit the cavern in search of bones to make pyre ships, as learned in Barbarian Training. Since mithril dragons, the source of chewed bones, are extremely dangerous to lower-level players, the player should concentrate on finding mangled bones instead. These bones can be obtained by rummaging a skeleton, which are found lying on the ground. There is one such skeleton just south of the safespot described above. Be aware that rummaging a skeleton may result in the player taking 2000 or more damage.

The dragon forge and mithril door

Beyond Kuradal is a long cave, ending in a chamber, the dragon forge, that contains a large basin, 3 dragon heads made out of metal, and many anvils. There are channels in the side of the basin and marks in the floor where lava flows from the mouths of the dragons and into the basin, then flows out again and runs along the floor, out of the room.

Once the orb in the chamber is lit, the forge fills with molten lava and can now be used. The player can use a blast fusion hammer, purchasable from the Blast Furnace Foreman at the Blast Furnace in Keldagrim for 1,000,000 coins, to fuse together the three parts of the dragon platebody with 92 Smithing (the Assist system cannot be used) or change between the three versions of dragonfire shield. Using the Blast fusion hammer here will cause it to disintegrate.

Players who try to use a metal bar on one of the anvils get the message, "The anvil resists the metal pushing it away." This also occurs with elemental bars, even though they are not classified as metal.

After partial completion of Hero's Welcome, a new door appears in the same area as the dragon forge, leading to the Dragonkin Lair. 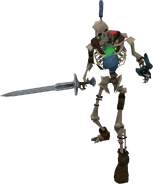 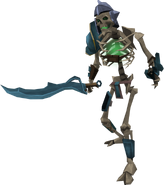 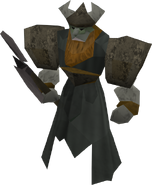 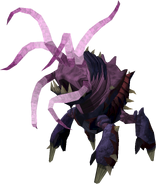 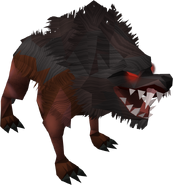 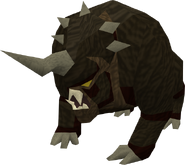 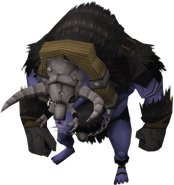 Confused barbarians and skeleton warlords, both of which wander the lower level, are opponents that are not that difficult. Spirits are tougher, hitting harder and more often. All three, however, only use melee, so the protection from melee prayer is effective against them. They may or may not be immune to the effects of poison.

Waterfiends are much more of a challenge. They use magic and ranged attacks, and their magic attacks can be very powerful. They are weak to bolts and immune against poison.

Brutal green dragons are tougher still, as they attack with melee, magic, and dragonfire breath. Like the waterfiends, these monsters are immune to poison.

Mithril dragons are very formidable. They attack using melee, magic, range, and dragonfire breath, and are weak to earth spells. Like waterfiends and brutal green dragons, mithril dragons are immune to all types of poison. The mithril dragons can hit high, so make sure to watch out for this. Even with good equipment and high defence, be aware that death is a possibility at any time.

On 8 December 2009, Jagex updated the ancient cavern with a new area housing the slayer master Kuradal and a variety of slayer monsters.

After the Harbingers of Tuska update of 3 December 2013, an additional chamber was added to Kuradal's Dungeon, containing a new slayer monster

Retrieved from "https://runescape.fandom.com/wiki/Ancient_Cavern?oldid=24925423"
Community content is available under CC-BY-SA unless otherwise noted.