RuneScape Wiki
Register
Don't have an account?
Sign In
Advertisement
in: Members' items, Items that are reclaimable on death, Grand Exchange items,
and 19 more
English 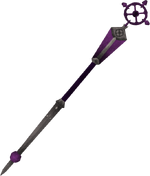 The ancient staff is a two-handed staff that requires 50 Magic and the completion of Desert Treasure to wield.

It may be bought once from Eblis for the price of 80,000 coins. It is also dropped by Mummies in the Jaldraocht Pyramid and the Chaos tunnels.

It has the symbol of Zaros at its head. Despite this, it does not give protection in the God Wars Dungeon.

The Loyalty shop has an option to recolour the Ancient staff for a cost of 6,000 Loyalty points. The colours are green, blue, red, and yellow.

An ancient staff is required in order to complete the Desert strykewyrm task in Desert task set. Once the elite set has been completed, it can be upgraded to the Enhanced ancient staff. The enhanced version has 1694 accuracy and +2 prayer. This is equivalent to a level 75 staff.