Yes
The Dig Site
No

An unusual symbol as yet unidentified by the archaeological expert. 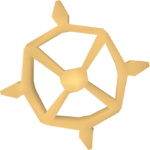 The Ancient talisman is a members-only quest item. It is obtained and used in The Dig Site quest. Once a player has passed all exams, they can go digging in the level 3 site (requiring a trowel and specimen brush) to eventually find the ancient talisman. Bring it to the archaeological expert to learn that it is actually a talisman of Zaros. The archaeological expert is impressed by this find and gives the player an invitation letter, allowing them to use the winches. After the quest, the talisman is on display at the Varrock Museum.

The talisman's inscription reads: "Zaros will return, And wreak his vengeance upon Zamorak the pretender."

Retrieved from "https://runescape.fandom.com/wiki/Ancient_talisman?oldid=24535009"
Community content is available under CC-BY-SA unless otherwise noted.