A crystal shapeshifter. She seems more coherent than the others. 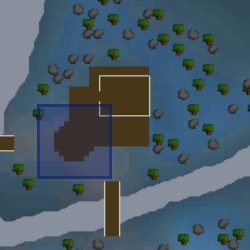 Angof is a crystal shapeshifter, and former elf, located in Tarddiad, in the north-east region of the realm, and can be interacted with during and after The Light Within quest.

The player can exchange crystal fragments with her to create Tarddian crystals, which in turn are used to restore Seren during the quest and after the quest they are used to buy crystal armour from her shop, Angof's Crystal Armour Shop. During and after the quest, players can also ask her to make the nearby shapeshifters tolerant or aggressive. If the player asks how she can make them tolerant and aggressive, she tells them that she can attune her crystals to change their perceptions and make it look "uninteresting" to them.

According to Angof, some of the elves stayed behind when Seren persuaded most of them to move to Gielinor. Those that stayed behind had a feeling of loneliness without her presence, and the crystals of Tarddiad had some of her presence in them. The elves then took them in to become less lonely, however their desire for more crystals increased over time, turning them into Crystal Shapeshifters. Angof has resisted the urges of the crystals longer than her fellow brethren and hopes that if she can resist their urges, so can her people. Despite this, she still believes the shapeshifters are "beyond redemption." Morvran informs the player of this when assigning a crystal shapeshifter task.

Although the player may suggest asking the other clans to help the shapeshifters return to their normal states, she declines their offer, stating that they would view them as monsters due to their appearance and would not help them.

Angof had a husband, Maldwyn. However, like many of the other shapeshifters, he fell to the insatiable hunger of the crystals. The player can find an Ancient elven wedding ring from the corpse of a Crystal shapeshifter, and can show it to Angof. She will recognise the ring and ask them if she can have it. After taking the ring, she will tell them about her relationship with Maldwyn.