Animal Magnetism is a quest during which the player helps Ava in Draynor Manor.

Draynor Manor has a new resident and, adventurers rejoice, she is a damsel in distress! Far from being Sleeping Beauty, she finds the Manor's beds not to her liking and is suffering from insomniac nights. If you fancy yourself able to aid Ava in her search for a good night's sleep, who knows what the budding scientist will produce as a reward?

Talk to Ava in the south-west wing of Draynor Manor. You have to search the "secret" candle sconce on the wall to gain access to the room where she is located. You find out she is the new assistant of the professor at the manor. She says that she isn't too pleased with her 'humble abode' and that she would love some help to make it better. She first needs two undead chickens which should be alive, as the dead ones won't work.

Go to the farm north-west of the Ectofuntus with your Amulet of Ghostspeak and ecto-tokens. Talk to Alice and tell her that you need a couple of chickens from her farm. You can reach the farm by walking east from the Canifis lodestone or, if you have completed Ghosts Ahoy, use your ectophial to teleport to the Ectofuntus and walk to the farm from there.

Alice tells you to speak to her husband, who is actually dead, on the farm. After talking to him, he will tell you to talk to Alice once again. She then tells you to ask him about their savings. Alice's husband says that the savings are in the bank, but refuses to part with the password, saying that "no one but a fool gives away their pass numbers". Speak to Alice and she suggests that you talk to an old witch who lives close to the farm, and can help to create a device so that Alice and her husband can directly converse with each other.

You'll need to talk to the Old Crone, who is located in the house just east of the Slayer tower.

Talking to her gives you a Crone-made amulet. You will not lose your amulet in this process. Give this to Alice's husband and watch the amusing cutscene. You will see him try to catch a sneaky undead fowl. He is interrupted by the player spoof Cow1337killr, who actually helps in the chicken's capture. In the end, the two talk it over, and will want ecto-tokens for the chickens that you need.

Head back to Ava and give her the undead chickens. She will now need a bar magnet, which is perfectly aligned. Talk to Helda in the north-west corner of Draynor Manor and give her 5 iron bars. She will give you a selected iron. She will tell you that you need to go to Rimmington mine and firmly strike on it to stabilise the field in the iron.

Go to the centre of the mine north-east of Rimmington and hammer the selected iron, while facing north, to turn it into a magnet. If you are not facing north, it will not work. To make sure you are facing north, simply click your compass, walk one square up, and you will now be facing north. Your character has to be facing north, not your camera! You will know it was successful when the Selected iron turns into a Bar Magnet. Also, you can not face north-west or north-east while attempting to make the magnet.

Give the magnet to Ava, and she will take it and move on to her next request.

She now needs undead twigs from one of the undead trees around the manor. You will now need to cut one of Draynor's undead trees (labelled in yellow when you right click on it, NOT the regular dead trees).

Try cutting an attacking tree; when this fails, return to Ava and ask her for advice. She will tell you to go see Turael as he has been using the Slayer skill to figure out a way to defeat the undead trees. If you have previously completed the While Guthix Sleeps quest, Turael will be replaced by his daughter, Spria.

Talk to Turael (or Spria), who is in the northern part of Burthorpe, and they offer to give you a blessed hatchet in exchange for a mithril hatchet and a holy symbol. Supply them with these two things for a blessed hatchet, a tool which can be used to cut down undead trees.

With the blessed hatchet either equipped or in your inventory, chop a Draynor Manor undead tree. When successful, you will receive 'undead twigs' (you will fail this if you do not have the Slayer requirement). Give Ava the twigs, and she will tell you she has almost completed the invention she is preparing for you, but her research notes need translating.

You will now have to translate her research notes (see the picture to find out the combination). To change the colours, simply click on the buttons at the bottom.

Once you have translated the notes, talk to Ava and she will give you a pattern. Combine this with a piece of hard leather and some polished buttons (the buttons are hard to get if you cannot dig at Digsite or steal them from H.A.M members, although they are dropped by H.A.M. guards) to create a container.

Give the container to Ava to complete the quest, and you will get a device in accordance to your ranged level. 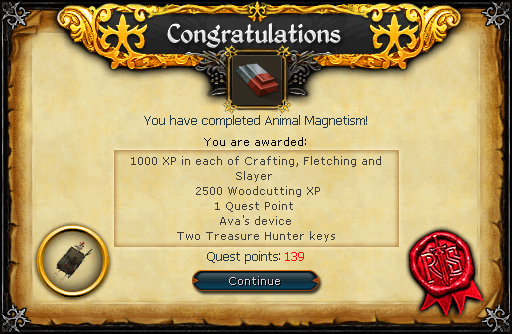 Completion of Animal Magnetism is required for the following:

Retrieved from "https://runescape.fandom.com/wiki/Animal_Magnetism?oldid=26300498"
Community content is available under CC-BY-SA unless otherwise noted.