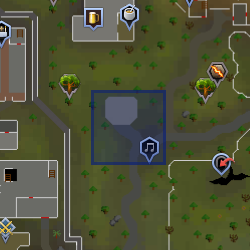 Lousiana 'Anna' Jones is a former archaeologist who worked for the Varrock Museum. She plays a minor role in the What Lies Below quest, and she will give any player a bronze pickaxe to enter the Tunnel of Chaos. She can be found east-northeast of Varrock. After What Lies Below, when the player fails to catch Surok Magis while he enters the Tunnel of Chaos, Anna will tell the player that they deserve it as they agitated Surok, and that if they don't pay her, she'll lodge a formal complaint to the government of Varrock.

Anna was former archaeologist working for the Varrock museum, until she decided to work for Surok Magis by assisting him to excavate the Tunnel of Chaos.

Retrieved from "https://runescape.fandom.com/wiki/Anna_Jones?oldid=24562261"
Community content is available under CC-BY-SA unless otherwise noted.