Start a Wiki
This article is about the Bounty Hunter reward. For other uses, see Annihilation (disambiguation).
For this item's augmented variant, see augmented annihilation.

A melee weapon of incredible power.

A melee weapon of incredible power. It is in need of repair. 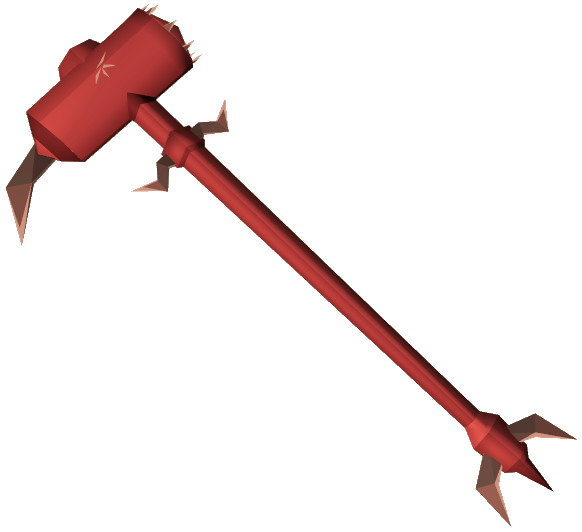 Annihilation is a degradable tier 87 two-handed melee weapon, available as a reward from Bounty Hunter. It can be purchased from the Bounty Hunter & Deathmatch Reward Shop for 30,000 BH points.

Annihilation degrades to a broken state over 60,000 charges of combat. It can be repaired by a Repair NPC for 4,500,000 coins, or for less at an armour stand.

The base repair cost of the Annihilation when completely degraded to 0.0% item charge is 4,500,000 coins. It can be repaired by:

Annihilation has a special attack called Gravitate, which uses 60% adrenaline. When used, for 30 seconds all successful attacks on your opponent(s) adds a stack (one stack per ability, or two stacks per Legacy Mode auto-attack), which increases your damage by 1% per stack (capping at 20%). The effect resets the timer and stacks if you use the special attack twice before 30 seconds, and the effect and stacks are cleared at the end of the 30 seconds, when an attack misses, or if you switch out your weapon.

The damage bonus from Gravitate doesn't affect bleeds, and it stacks with Berserk additively (so 220% with Berserk and 20 stacks). The best way to quickly add stacks is with multi-hitting attacks such as bleeds or AoE attacks on multiple targets. The damage bonus only applies on the current stack before the attack (Ex: If you have 10 stacks and used an attack, that attack will deal an extra 10% damage and will gain 1 stack (or 2 in Legacy) for a total of 11 (or 12) stacks). In 30 seconds and without any extra hits from effects (God books, Attacker's insignia, Aftershock, etc.), the maximum amount of stacks that can be obtained in Legacy is 16 stacks, but the hit will only benefit from the 14 stacks for a 14% damage boost.

Comparison with other melee weapons

Retrieved from "https://runescape.fandom.com/wiki/Annihilation?oldid=19985251"
Community content is available under CC-BY-SA unless otherwise noted.