RuneScape Wiki
Register
Don't have an account?
Sign In
Advertisement
in: Intermediate quests, Quests, Another Slice of H.A.M.,
and 2 more
English

Another Slice of H.A.M.

Another Slice of H.A.M. is the third instalment in the Dorgeshuun quest series. It involves another plot orchestrated by Sigmund to destroy the Dorgeshuun, this time involving the dwarves. However, you also discover Zanik's destiny during the quest, insofar as she accepts it...

The dwarves are building a new underground rail link between their city of Keldagrim and the cave goblins' Dorgesh-Kaan, but work is being held up by the discovery of ancient goblin artefacts, and they need the help of a qualified archaeologist. Helping them out should be simple enough — unless you stumble upon another H.A.M. plot against the city.

Speak to Ur-Tag or Ambassador Alvijar to start the quest. They can be found by going upstairs in the northern part of Dorgesh-Kaan.

You can find Dorgesh-Kaan by climbing the ladder in the Lumbridge Cook's room, squeezing into the hole and following Kazgar through the mine. Make sure you bring your light source.

If you don't know how to get there go directly south from Mistag and you will see a door that you can open which leads to the city. When in the city climb up the north stairs, then head slightly east to the house Ur-Tag and Ambassardor Alvijar. They will explain they are making a train route between Keldagrim and Dorgesh-Kaan.

Go south-west of the city on the same floor until you find a transportation sign on the minimap. Go through the doorway and you will end up in a train station.

Walk south down the track and talk to Tegdak, who will give you a trowel and a specimen brush. Dig up the artefacts hidden in the floor by using the trowel on them. There is one north of the specimen table, one northwest of the specimen table and four south of the southernmost sample table. Clean all six artefacts by using an artefact on the specimen table—you will then end up with an armour shard, a hatchet head, a helmet shard, an ancient mace (Just called 'Mace' at the time), a shield fragment and a sword fragment. After cleaning those, talk to Tegdak again.

Now take Zanik with you and go to the goblin scribe in the house directly west of Ambassador Alvijar's house (the quest start point). (The mace will not show up in your inventory) Talk to him about the symbols that are covering the mace that you found. The scribe will not be able to tell you anything about the symbols but he suggests that you go talk to the goblin generals in Goblin Village.

Talk to Oldak, who lives in the house west of the scribe's house. Go inside the house and then down the stairs. Speak to him, and he will give you a sphere to teleport back to the city after he sends you to the Goblin Village. If you mess up or leave the city you can go back to the tracks and get Zanik again.

Once you're in the village, talk to one of the generals and a cut scene will begin. At the end, you discover that Zanik is most likely the goblins' "chosen one" to lead them. The mace is also found to have the power of the Goblin God.

At the end of the cut scene, two H.A.M. members show up and start attacking the goblins with Magic and Ranged. Take the path around the back (west side) of the buildings, but stay out of the attack range. When you get to the tower, climb up the ladder and kill the H.A.M. mage and H.A.M. ranger with either mage or range. The Magic-Using H.A.M. member NEVER splashes, no matter what armour you wear.

The mage and ranger will hit at the same time, so using protection prayers can only reduce damage. For this part, it is recommended that you wear dragonhide or other armour with good magic and ranged defence bonuses. Ava's accumulator/attractor will not work for your expended arrows, and since you cannot retrieve them after the battle, it is not recommended to use expensive arrows. There are 50 bronze bolts as well as a crossbow by the crates which you could pick up and use.

If for any reason you have to leave during the fight, you can go back to Goblin Village again without having to go back to Dorgesh-kaan and you will be brought back to the H.A.M attack.

When you have done this, there will be another short cut scene where Zanik is kidnapped by Sigmund. The goblin generals will tell you they are sending two sergeants to help you and that you should meet them at the Lumbridge Swamp Caves. They will also give you the ancient goblin mace. If you lose the mace, you can buy it from the Generals Bentnoze and Wartface for 1,000 coins.

Getting past the guards

Sigmund plans to kill Zanik on the train tracks between Keldagrim and Dorgesh-Kaan, making it look like an accident so that war will break out between the dwarves and the goblins. You cannot enter through the Dorgesh-Kaan entrance this time, so you must go to the swamp cave entrance and meet the goblin warriors who will be helping you.

Now go to the Lumbridge swamp and talk to the goblin sergeants, Sergeant Slimetoes and Sergeant Mossfists. They should be outside, near the entrance to the Lumbridge Swamp Caves (make sure you have your light source for this part).

Climb down the "Dark hole under tree" into the caves, and next to the rope should be a ladder. Go down it and you will briefly see a H.A.M. guard before he runs away to get reinforcements. Now quickly run down the hallway and hide in the storeroom while the first two guards pass. Then walk out and hide behind the north-eastern crate, and wait for one more guard to come out. (By this point, at least one of the guards will have noticed you, but as long as you hide behind the crates before he arrives, you will be safe.) Once the next guard stops moving, start walking toward the final guard, and immediately double back to the goblins. He will head toward the goblins, leaving you free to proceed to the ladder.

Do not attack any guards, even the ones that are fighting the goblins, as doing so will result in getting caught. If a guard does see you, quickly run to the goblins before he gets near you, as you will be forced to restart from the entrance to the caves should he get too near.

At the bottom you find that Sigmund has Zanik tied to the tracks of the new train station. His prayer ability makes him immune from all damage types, so you need to use the ancient mace special ability to disable his prayers. Fill up your Adrenaline gauge to 100%, then equip the Ancient mace and use the special ability (found under the constitution tab: "Favour of the War God"). Alternatively, if you climb back up the rope (the guards will be gone), switch to legacy mode and come back down, the mace's special attack will be available immediately.

Now that his prayers are disabled you can kill him with any weapon fairly easily. He seems to have a high defence—low levels be warned. If you attempt to untie Zanik whilst the fight is in progress, you will be hit for around 100 life points of damage. If you die, your gravestone will be by the ladder in the Lumbridge caves. You will have to sneak past the guards again.

When he is defeated, he will teleport away. Untie Zanik, and watch the final cut scene to finish the quest. 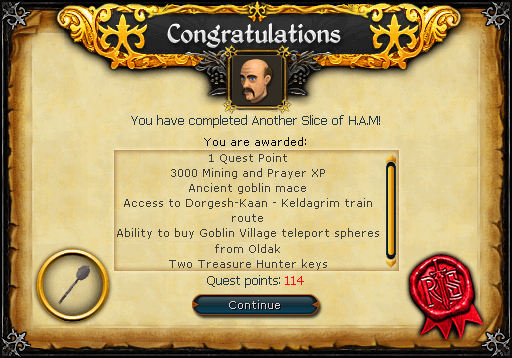 Completion of Another Slice of H.A.M. is required for the following: