Come, old broomstick, you are needed. 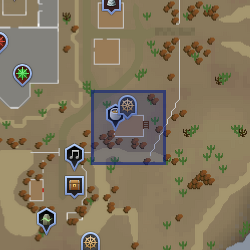 The apprentice is a mage training under the Sorceress. She can be found in the house north-east of the Shantay Pass. She can practise her magic by teleporting adventurers who ask for access to the Sorceress's Garden, following the completion of Diamond in the Rough and having spoken to Osman. Adventurers must not have a follower at the time. A local cat called Del-Monty often comes to the sorceress's house to play with spiders, at which the apprentice panics and teleports the cat to the garden.

Following completion of Swept Away, she can upgrade the broomstick to teleport directly to the Garden.

Retrieved from "https://runescape.fandom.com/wiki/Apprentice?oldid=24563147"
Community content is available under CC-BY-SA unless otherwise noted.
... more about "Apprentice"
RDF feed
Is members only
No +
Store location
South-east corner of Al Kharid +