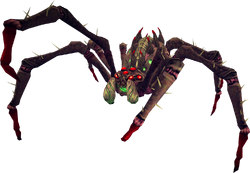 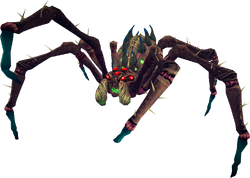 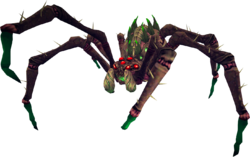 Araxxor is an enormous araxyte spider who lives in the Araxyte lair, a cave beneath the Haunted Woods, just south of Port Phasmatys. He is the second most difficult solo boss in RuneScape. He can be fought alone or with a friend, although he is considerably stronger if fought with a friend. His drops include components for three level 90 two-handed weapons, one for each combat style, along with a pet, with multiple skins to be unlocked for the pet through achievements.

One can influence the flow of the battle oneself; the deepest part of the Araxyte hive can be reached via three potential paths, and in order to defeat him the player must lure Araxxor along one of these paths and onto the platform at the end of the hive. The player must choose from one of the available paths at the beginning of the fight by burning one of the giant webs near entrance of the hive and waiting one minute until the chosen path becomes available. The player's choice of path will affect Araxxor's combat mechanics throughout the rest of the fight. Only two of the three paths are available on any given day.

When there are two people fighting instead of one, Araxxor's attacks are doubled, and the higher of the two base rage values is used. This includes minion spawns and its strength in general.

Despite displaying a "None" weakness in the combat interface, Araxxor's 3 different forms actually have weaknesses in line with the combat triangle.[1] Players carrying an araxyte pheromone in their inventory will cause Araxxor to spawn using a combat style favourable to the player. For example, using ranged to fight Araxxor while holding an araxyte pheromone in one's inventory will cause Araxxor to spawn using Magic. If utilizing a pheromone, take care to enter the fight wielding your primary weapon or Araxxor can inadvertently spawn as a combat style you are weak to (i.e. entering the battle with your enhanced excalibur equipped will cause Araxxor to spawn as a melee type). Araxxor cannot be hurt by familiars or dreadnips.

Araxxor does not count as a spider for Slayer assignments.

Obtaining all unique drops will unlock the title, [Name] the Araxyte.

Araxxor is located in a cavern south-east of Port Phasmatys called the Araxyte lair. Although it is not needed, having 92 Agility will allow the player to use a wall shortcut to skip the majority of the path to the cavern if leaving from the gates. Alternatively, a player can teleport straight into the cavern, outside the arena by having their PvM portal in the Max Guild attuned to him.

Only one person or duo can enter the base world instance at a time. If the fight is already occupied, you will not be able to enter and will have to pay the 200,000 coin instance fee in order to fight Araxxor on the same world. Using an instance or holding araxyte pheromone in your inventory guarantees Araxxor in the preferred combat style, which is determined by what weapons you are wielding in your main hand when you entered the arena. If you have no weapon in your main hand slot, Araxxor will choose a random attack style, regardless of whatever equipment is in the off-hand slot. This can be dangerous, as the player's accuracy will drop if he spawns in a form equal to or strong against yours.

Araxxor has 3 paths which you can take, however, only two paths will be open in a given rotation. The path you choose decides the order of the mechanics Araxxor uses, though during the third phase of the fight Araxxor will utilise a variation of the other unblocked path's mechanics.

Araxxor comes in one of three combat styles; he will always be able to use a melee attack if his target is adjacent to him. This means his magic and ranged forms can use melee as well. His melee form uses melee exclusively, but has a longer attack range of up to 3 squares and also applies a constant typeless bleed effect which hits up to the mid hundreds.

Moving beyond the burnt web will automatically start phase 2 regardless of how much LP Araxxor has left from phase 1 and his health will replenish back to 100,000 LP once phase 2 begins (except the darkness path). The condition to proceed to phase 3 from phase 2 varies depending on the path chosen - for the minions path, phase 3 can be initiated simply by running to the end of the ledge, acid path by climbing down the ramp once Araxxor has degraded it enough, and darkness path after Araxxor has destroyed the wall completely.

Any leftover health which was not depleted from Araxxor during phase 1 and possibly 2 will be carried over to phase 3 - Araxxor will regenerate any leftover health from phases 1 and 2 when he's damaged during phase 3. As Araxxor's attack speed is increased in phase 3 and he also has access to the two open paths' special attacks, it is highly advisable to damage Araxxor as much as possible before initiating phase 3.

Araxxor, like Vorago, cannot be defeated until all of the phases have been finished and the requirements met. Additionally, players are unable to teleport out of the hive by any means and the waiting time to log out is extended. Despite this, it is possible to leave during the fight by running as far as possible away from Araxxor when he begins healing using his web, and attempting to log out repeatedly assuming no spider minions are currently attacking the player.

Araxxor cannot be killed by the player, and drops no items upon death. If his life points are reduced to 0 before the third phase of the fight, he will be instantly healed for 5,000 life points by spiders on the ceiling of the hive. Once his life points are reduced to 0 on the third phase, he will retreat to a platform at the rear of the hive and be killed by a blow from his mate; Araxxi. She will then attack the player and start the final phase of the fight.

If a player dies, their grave will appear in the graveyard which can be reached by right-clicking the Araxyte cave entrance.

Araxxor's initial rage will increase as Araxxi is killed, increasing his damage and attack speed. This rage meter resets every day at 00:00 UTC, and has a maximum cap of 300% base rage.

The rage meter does not reset unless the player logs after reset time or uses an araxyte pheromone.

Araxxor himself does not reward any drops. Instead, they come from the corpse of Araxxi, the spider that kills Araxxor in the final phase of the fight. The corpse functions similarly to the Queen Black Dragon's reward chest; Items may be discarded, placed in the inventory, or sent directly to the player's bank. They may also be gambled for an additional chance of unlocking a Boss pet. The corpse will always contain at least one unique drop, and at least 2 additional drops. Its drops include the components required to create level 90 two-handed weapons, and a pet with unlockable skins. For a full list, see Araxxi's page. 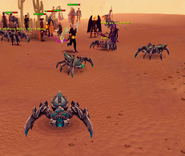 Players transformed into Araxxor's minion spiders during the teaser livestream

Statistics of Araxxor 1 week after its release