An expert on archaeology. 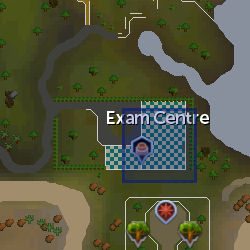 Terrance Balando is an archaeological expert at the Exam Centre who is interested in the historical value of items which might be found there. Players can use items on him and he will tell them if there is any archaeological significance to the item. Players who bring him 3 gold nuggets will also receive 1 gold ore in return.

After completion of The Dig Site, when spoken to he will give the player the Codex Ultimatus, which unlocks the abilities Blood Tendrils, Smoke Tendrils, Shadow Tendrils, and Ice Asylum.

His real name is Terry Balando, named in the Desert Treasure quest, where he needs to translate an ancient stone tablet for you. In the quest, The Temple at Senntisten, you must speak to him to get permission for Azzanadra to restore the temple beneath the digsite. If you speak to him while wielding an Ancient staff, he says it is incredible, and comments on the Zarosian symbol.

Retrieved from "https://runescape.fandom.com/wiki/Archaeological_expert?oldid=24562409"
Community content is available under CC-BY-SA unless otherwise noted.