Hardened by the cutthroat world of archaeology. 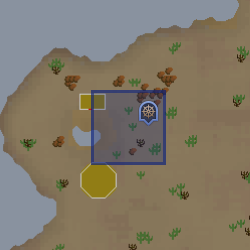 Asgarnia Smith is an archaeologist that plays a role in the Desert Treasure quest. Players begin the quest by talking to him. He is searching for treasure instead of pursuing the science, however, and can be asked about some of his adventures. According to Smith, he once managed to recover a Karamjan artefact known as the Golden Monkey of Tee-Tah-Toh. He also tells the player that he has heard of more treasure in Karamja, and he will be going there shortly.

Retrieved from "https://runescape.fandom.com/wiki/Archaeologist?oldid=24563437"
Community content is available under CC-BY-SA unless otherwise noted.