• Master of the Wizards' Tower.
• Hoping to bring some magic to the beach. (Summer Beach Party) 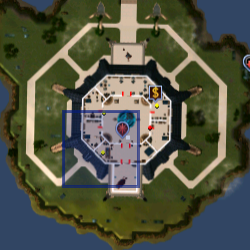 Head wizard of the Wizards' Tower.

Sedridor is the current archmage of the second Wizards' Tower, which trains wizards in the magical arts. He can be found in his office on the 2nd3rd floor[UK] of the tower.

As the Grand Archmage of the second tower, he has wrongfully banned Ariane from the Wizards' Tower for demon-worshipping, as shown in the Lore "The Burning Tower" and dialogue with him during Rune Mysteries, even going so far as to cast a ward to prevent her entry.

During the events of Rune Mysteries, he refuses to admit Ariane into the tower, reassuring that he has prepared a ritual to cast Icyenic Purge in order to rid the tower beam of the vortice that attacked Wizard Borann. During the ritual, however, he is distracted by the player playing the lower manuals of the organ in order to buy time for Ariane to cast the proper spell and save the day.

After the quest Rune Memories, Sedridor will be saddened by the betrayal of Wizard Ellaron and offer players to take from his personal rune chest after the quest which yields pure essence equal $ 2.5 \times level\times (level+1) $ - this is updated each time a level is gained, for a total of 24,750 essence granted once level 99 is reached. He will also offer the Archmage title to players who have 99 Magic and Runecrafting.

Sedridor used to be the head wizard and chief of research at the Wizards' Tower. In the old Rune Mysteries quest, Sedridor, having struggled to rediscover the knowledge of runestone creation, which was lost after the destruction of the Tower by Zamorakian mages decades ago, recently succeeded in this task largely due to the efforts of an adventurer who brought him an unidentified air talisman from Lumbridge's Duke Horacio, who knows of Sedridor and his vast lore well enough to send it to him for examination. He is located in the tower's basement. You are required to talk to him twice during the Rune Mysteries quest. After the said quest, you can use him to teleport to the rune essence mine, where you can mine rune or pure essence. He is seldom visited for this, because he is so far away from a bank. Sedridor has conducted extensive research on runes and the secrets of crafting runestones, eventually combining his research with that of Aubury's rune knowledge to unlock the secrets of the air talisman, thus considerably increasing the Wizards' supply of runes and leading to the opening of a Runecrafting Guild, which is run by a friend of Sedridor's, Wizard Elriss.

Archmage Sedridor is one of the four NPCs who can teleport to the sandcastle building area in the Summer Beach Party. While he is present, building the Wizards' Sandtower (a replica of the Wizards' Tower) will grant double experience.

Sedridor played a minor role in the RuneScape novel Legacy of Blood. In 164, he was one of the three judges, alongside Wizard Grayzag and Aubury who decided the fate of the wizard Castimir for the crime of stealing knowledge. They voted to expel Castimir from the Tower permanently but spared his life. Afterwards, he had Aubury equip Castimir to become a rogue wizard, revealing that the Tower occasionally hired rogues to perform tasks that Tower wizards could not be seen doing.

Aubury and he later fought the army of Tenebra at the Second Battle of the Salve but the two wizards were quickly incapacitated by a darkness attack.

Retrieved from "https://runescape.fandom.com/wiki/Archmage_Sedridor?oldid=24605624"
Community content is available under CC-BY-SA unless otherwise noted.