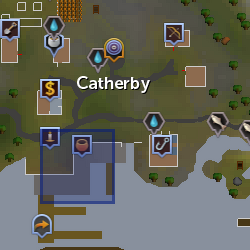 Arhein runs Arhein's Store in Catherby, on a pier just south of the bank, near the Charter ship. He also plays a small part in the Merlin's Crystal and the One Small Favour quests.

Arhein owns a ship on the pier, which he uses to deliver candles to Keep Le Faye, a fortress to the south. He does not allow players to ride his ship, although it is possible to sneak aboard it to get to Keep Le Faye by hiding in a crate near the candle shop in Catherby, which is used by the player in Merlin's Crystal quest.

During One Small Favour a player must get some special type of rope known as T.R.A.S.H from him to give to Captain Bleemadge after the player has finished his favour to him of asking the seer Phantuwti Fanstuwi Farsight for a weather report fearing his new shipment might get ruined.

He sells 40 pineapples and 80 seaweed per day for 2 coins each. You must talk to him to get the option to buy them.

As of an update on 20 October 2009, Arhein sells pineapples and seaweed in noted form.

Arhein's cheap pineapples and seaweed can be turned into profit by using them as ingredients in making supercompost or pineapple pizzas and molten glass, respectively.

Arhein sells pickaxes, a trait which other general stores do not have.