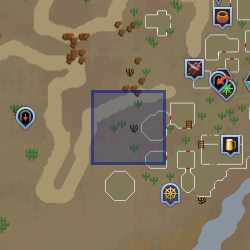 Aristarchus is a Menaphite scholar who currently resides in Pollnivneach. If spoken to, he will provide information on Enakhra, Akthanakos, the Camulet, and Enakhra's Temple. During and after Our Man in the North, he can be found the Grand Library of Menaphos.

Retrieved from "https://runescape.fandom.com/wiki/Aristarchus?oldid=19740039"
Community content is available under CC-BY-SA unless otherwise noted.