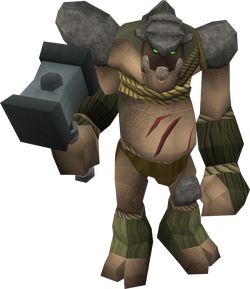 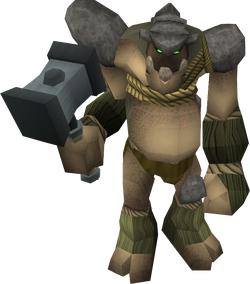 Arrg is a troll and partner of Aga.[1] He actually has several troll girlfriends due to his size and strength,[2] but does not consider Aga's desire for love to be important,[3] finding the concept confusing and irritating.[4] He has a Troll Romance rival for Aga's affections in the form of Ug, a weaker troll.[1]

After Ug obtains a trollweiss flower to prove his love, Arrg must be fought and defeated. He is one of the strongest mountain trolls in RuneScape, and uses melee and ranged, both of which can hit up to 649, although the Fremennik round shield reduces the maximum damage from ranging to 200. When fighting him, it is recommended to wear at least rune and have a high combat level. He teleports the player to the Troll arena to fight.

It is best to use a combination of protect from melee and ranged prayers against him and switch prayers as he switches attacks. His attack speed is equivalent to that of a whip, and also have fairly high defence, so this can be tricky. After being defeated, he begs the player for mercy.[5] Arrg is fightable as a class D boss monster in the Dominion Tower minigame if Troll Romance is complete.

Due to the troll naming method, he either ate something called "Arrg" or something that made the sound "Arrg", as trolls are named after the first thing they eat, or the first sound it makes if it has no known name.