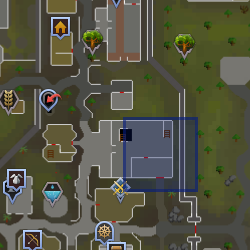 Jacques can be found on the top floor of the Varrock Museum. Jacques is busy examining the museum's single work of art, a painting depicting King Lathas of Kandarin. Although he claims to be very well-known, the players' reaction when speaking to him suggests he is less famous than he claims.

When spoken to, Jacques will talk about his dreams of opening a gallery of his paintings in the museum. Although the museum does not currently have room to facilitate this, the Varrockian government's recent donation to the museum may make this dream a reality. It may yet be released as part of a future update.

The teacher and pupil have a short conversation about him when a player talks to either.

Jacques tells the player that, when he was young boy, his father (who was also an art critic, as well as an avid lover of poetry) would read him works of Charles Baudelaire, a real-world poet and critic. Jacques attributes his love of art and poetry to this. He then cites the second verse of Baudelaire's poem 'La Beauté' ('Beauty'):

Even on a french server, Jacques can still be asked what the poem means.

Retrieved from "https://runescape.fandom.com/wiki/Art_Critic_Jacques?oldid=24563277"
Community content is available under CC-BY-SA unless otherwise noted.