RuneScape Wiki
Register
Don't have an account?
Sign In
Advertisement
in: Experienced quests, Quests, As a First Resort
English

As a First Resort is an experienced quest in the ogre series where you agree to aid the ogresses of Oo'glog in expanding their hot springs into a proper resort. The quest was acclaimed amongst players as it unlocks the Oo'glog spa, where pools can improve performance by restoring prayer points above the capacity, give unlimited run energy for a period of time, etc.

After discovering the beneficial properties of some of the natural springs of the area, an enterprising human has convinced a primitive tribe of ogresses to transform their rustic encampment into a medicinal spa of sorts. Before Oo'glog can open for business, though, the area must be prepared, a pest problem needs to be sorted and the ogres really ought to be reminded that bashing people with big clubs isn't a traditional health treatment. 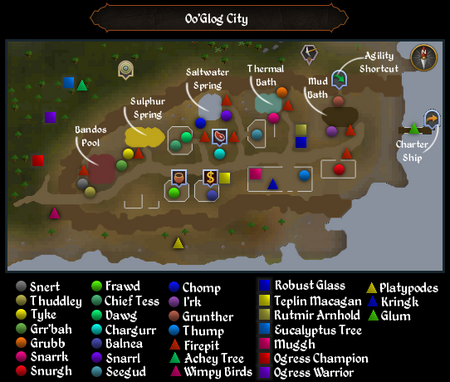 Travel to Oo'glog, directly south of Yanille, and speak to Chief Tess. She tells you that she cannot open her business for customers until the "bossy lady" at the bank in Oo'glog allows her to do so. Offer to help, and the chief asks you to speak with Balnea, the "human lady" in the ogre village's bank. Balnea has promised the ogres 'shiny pretties' in exchange for letting her set up her spa in the city.

Enter the bank, across the path from the chief's hut, and talk to Balnea. After a long dialogue filled with business-talk, Balnea asks you to help turn Oo'glog into a health spa.

Agree, and she sends you first to help the village's chef set up a spit and cooking fire. This also opens the bank in Oo'glog.

Catering to their needs

Speak to the ogre cook, Chargurr, just north of the bank. She tells you she needs a big fire with lots of logs to cook chompy. Agree to get the logs for her. Give Chargurr eight achey logs and ten eucalyptus logs. Lay the logs in the pit to set up an unlit stove.

Speak with Chargurr again and she tells you that she wants big, long spears to cook chompies on. Give her four spears to be used as spits.

Talk to Chargurr, and tell her you would like to give her the four spears. You hang them in the trees, over the logs. Again, speak with Chargurr, who now needs 2 chompy birds. Fetch her the raw chompy birds and stick them on the spears. Talk to her again, and now she instructs you to light the fire. Do so and speak to Chargurr one last time to finish the first task and setup catering services for the resort.

Relax, there are no bedbugs here

Speak to Balnea in the bank. She asks you to help Snurgh, the hotel manager in the building in the south-east corner of the village.

Speak to Snurgh, who informs you that the pillows in the hotel are made of raw meat, the softest thing that she could find. Advise her to use feathers instead of meat. She agrees and asks you to get her some stripy feathers. Give her eight stripy feathers from tropical wagtails so that she can make the pillows.

Return to Balnea for the next task.

Items needed: 8 larupia furs (tatty or regular) and 4 wolf bones (if you need to trap the larupias, bring a teasing stick)

Have another jargon-laced conversation with Balnea. She says your next task is to help Kringk in the hair salon just east of the bank. She asks how can she do hair with no tools. Tell her you will help. Take four wolf bones and eight larupia furs to Kringk. Talk to her again, and give her the four "wolfsie bones" and eight "Lup-Lup furses" to complete this task.

Items needed: 16 eucalyptus logs, 7 each of the five types of herb (the maximum number you may need if you follow the method below)

Speak to Balnea a fourth time. She wants you to help Seegud, who is in the hut north-east of the bank.

Talk to Seegud. She tells you she needs to clear flying bugs from the five spa pools by lighting fires in the fire pits next to each pool. For each type of bug, you need to burn eucalyptus logs and a specific plant to keep the swarm away. Seegud has placed stones beside each fire pit to help her remember what to burn.

You will need to collect the plants from outside of Oo'glog and combine them with eucalyptus logs to light the fires. Go north-west from Seegud, and examine the pile of stones between the salt-water spring and the fire pit. In your chat window, you see a description of the stones.

Place the logs and the plants that match the stones in the fire pit, and light them. You quickly notice something is not right: the bugs are still hovering over the pool and a mischievous ogre child is laughing. Return to Seegud, and speak with her. She says the ogre children must have mixed up the stones. You now need to discover which plants the mixed-up stones represent.

A player jumping in a spa.

Which stones match which plants is different for each player. Discover their new relationships through a process of elimination. As you learn which stone represents which plant, make a note of the match so you do not have to figure it out again. Each combination only requires two plants and one eucalyptus log, except for the Bandos pool.

To begin, examine the pile of stones next to one of the pools. Place the logs and one of the plants in the fire pit, and light them. If you get the message, "The fire has a pungent aroma, but it doesn't seem to have any effect on the insects," add more logs and a different plant to the fire pit and light them. Fresh logs are required for each attempt, otherwise you will not disperse the insects even if you find the correct combination. If you get the message, "The pungent smell makes the insects disperse", the combination is correct.

Finally, after dispersing all the bugs, speak to Seegud and then return to Balnea.

Talk to Balnea to learn about the "one last outstanding matter." She asks you to trap the creatures wandering around the village. She suggests they may not be as easy to trap as you might think and recommends you talk to Chief Tess to learn how to catch the creatures.

Talk to Chief Tess. She tells you the animals in the area are clever so you have to be sneaky to catch them. You need to burn "stuffs" to lure the animals to the traps.

To catch the diseased kebbits, set deadfall traps on the boulders to the east and west of the salt-water spring; catch two from each side of the spring, as they will not follow you very far.

Diseased kebbits become aggressive if you burn tansymum nearby them. Also, If you try to set more than one trap at once, an ogre child scolds you: "Hey, you, human! You no allowed to clutter up Oo'glog wiv traps. You only set one at a time here."

To clear Oo'glog of the wimpy birds, set a bird snare in the area west of the bank. Light a tansymum flower and run around to attract the birds to the snare. There are 5 wimpy birds to catch.

Wimpy birds become aggressive when you burn fever grass. Burning lavender will make them peck you.

Rid Oo'glog of the platypodes by laying a box trap and then burning lavender in the area west of Chief Tess, by the sulphur spring. Platypodes have poison spurs. Do not burn fever grass as it may cause them to attack with their "webbed feet of doom".

Once you catch one, check the shaking box to put the platypus in your inventory. After you have caught the whole family (Patrick, Peanut, Penelope, and Peter), go to the north-east corner of the village, by the coast within Oo'glog, and release the platypodes near the bulrushes. Each released platypus gives you a casket or an oyster.

Once you have caught all the creatures, return to Balnea one last time (you must dismiss any active follower). You then see a cutscene of the grand opening of the spa and the Wise Old Man taking to the waters. 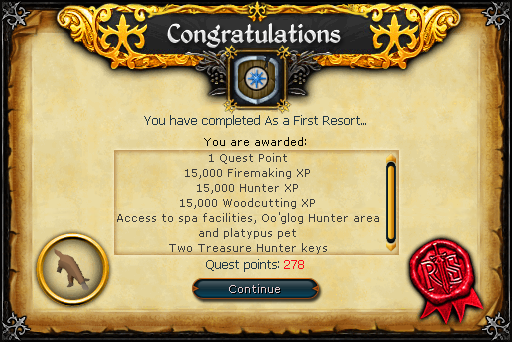 The fairies cutting the ribbons