Players cannot cast high or low alchemy in the dungeon. 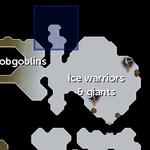 There are a number of ways to get to the resource dungeon. The fastest way to get there is with the Dungeoneering cape's perk. Players with at least 99 Dungeoneering may use the the perk to teleport to the entrance of any available resource dungeon an infinite amount of times. The next best way is to use a hoardstalker ring. It will also teleport the player straight to the resource dungeon, but it only has 8 charges per ring. Other methods of getting there include using the Port Sarim lodestone and running south, or using the fairy ring code "AIQ".

Inside the resource dungeon

Inside is an icy cavern that contains 12 frost dragons, which players often kill for their valuable drops and most notably, frost dragon bones. There are six dragons on both sides, although the southern ones are closer to each other than the northern ones.

An anti-bot update on 1 August 2012 made it so your Dwarf multicannon will instantly decay when you leave the cave. It must be reclaimed from Nulodion or Isak. Another anti-bot update created Frost dragon bone spawns that are unobtainable by any means (including telegrabbing). Players who die in the dungeon will have their graves placed outside the dungeon's entrance.

This place is the only location where frost dragons can be found outside of Daemonheim. When first introduced to the game players could make upwards of 5M gp per hour. Being a 100% drop, frost dragon bones have dropped significantly in price; however, they are still good for making money and currently sell for around 16,991 each.

Community content is available under CC-BY-SA unless otherwise noted.