An ancient spirit of nature. 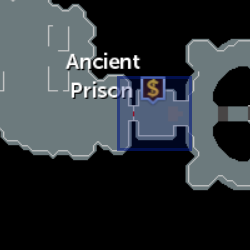 Ashuelot Reis is a nature spirit who resides in the Ancient Prison of Zaros's Army, atoning for past sins. She is located between the prison main area and the boss's chamber, where Nex resides. If asked, she will explain in detail about the Ancient Prison and its inhabitants, and also allows bank access.

During the God Wars, the last army of Zaros battled the forces of Saradomin and Zamorak near the Mahjarrat Ritual Site in an attempt to capture the site and gain the upper hand on the Zamorakian Mahjarrat. This army was led by Nex, a powerful Zarosian. During this battle, Nex and her army were lured into an icy cave and put in an enchanted sleep by Saradominist forces. These Saradominist forces then built a temple around the cave to contain the Zarosian army, this temple is the God Wars Dungeon itself. Ashuelot was originally a Saradominist, as were many of her kin. Ashuelot and her kin grew tired of the violence and destruction of the God Wars. During this time they were approached by a mysterious stranger who spoke to them of Guthix, a god capable of ending the God Wars. This stranger told them about a ritual capable of awakening Guthix, who would end the God Wars. Ashuelot and her kin quickly abandoned the cause of Saradomin and learned Guthixian ways through the stranger, becoming Guthixian in the process.

The stranger brought them into the icy caves to perform the ritual to awaken Guthix. Ashuelot and her kin performed the ritual, however the ritual instead awakened Nex from her enchanted sleep. With Nex awake, the stranger revealed himself to be Sliske, a Zarosian Mahjarrat. To save herself, Ashuelot used her Guthixian teachings to become a nature spirit, and now stands guard in the Ancient Prison.

Retrieved from "https://runescape.fandom.com/wiki/Ashuelot_Reis?oldid=24564197"
Community content is available under CC-BY-SA unless otherwise noted.