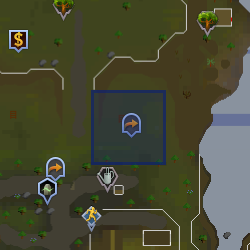 Assistant Le Smith is a NPC discovered after completing Enlightened Journey. Players can talk to him to use the Balloon transport system. He is presently employed by Auguste for the Grand Tree balloon route. Previously he was a glider pilot, however he was kicked out for being too full of hot air.

Retrieved from "https://runescape.fandom.com/wiki/Assistant_Le_Smith?oldid=24563558"
Community content is available under CC-BY-SA unless otherwise noted.