He'll never give up and he'll never let you down. 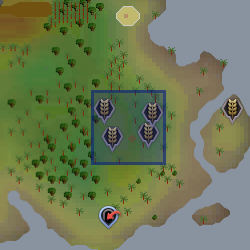 Astlayrix is located in the Herblore Habitat area. He explains to you how to find jadinkos and lists the requirements to attract them after having found them at least once. He's from Taverley. He invited his friend Dotmatrix over, who was attacked by a mutated jadinko.

Retrieved from "https://runescape.fandom.com/wiki/Astlayrix?oldid=24564144"
Community content is available under CC-BY-SA unless otherwise noted.