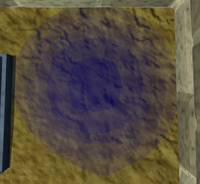 Asyn Shades lurk behind the black door in the Mort'ton shade catacombs dungeon. They initially appear as dark bluish moving shadows, known as Asyn Shadows, on the ground and then rise from the depths to attack or retaliate. On occasion they have also been known to leave their catacombs to attack trekkers and ramblers in the town above their dark burial place. Their remains can be cremated with eucalyptus, yew, or magic pyre logs. The Salve amulet and Salve amulet (e) work well on this shade which is very useful if shades are assigned for a slayer task.

You need at least a black key, which can be obtained from burning Riyl remains, to gain access to the Asyn shades. Level 63 Firemaking is needed to cremate Asyn remains and get the silver key to get access to the Fiyr Shades.