He seems to be very well off. 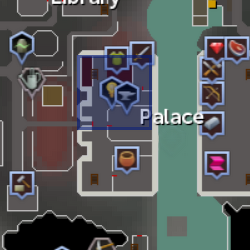 Audmann is an extremely wealthy dwarf and a resident of Keldagrim, the bustling capital city of the Dwarven Realm. He lives on the city's west side, where the most accomplished of the city's dwarves make their home amongst towering houses and high-end shops.

The dwarf is currently shopping in Keldagrim Palace, a massive structure spanning the River Kelda that divides the city in half. He can be found browsing the various wealthy shops that have been established on the ground floor of the Palace.

Audmann's incredible wealth, though, has given him a low opinion of anyone that hasn't made a fortune equal to his. If spoken to, he will generally comment on others' lack of dignity, commenting that "their presence is obnoxious".