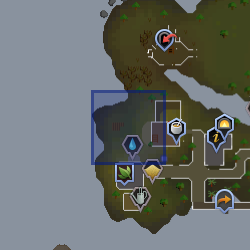 Auguste is a monk of the Holy Order of Entrana. He has lived on the island his entire life, learning the ways of Saradomin and leading a peaceful life. However, Auguste's desire for a more exciting life has finally convinced him to seek something more. He can be found on the western coast of the southern half of the island.

Auguste has the honour of being the inventor of the first hot-air balloon, and convinces players to help him in this quest to fly around RuneScape in the quest Enlightened Journey. Once the quest is completed, players who have sufficient Firemaking levels can make use of the Balloon transport system to travel to various locations.

Also, if players have a bomber cap and gnome goggles with them, Auguste will sew them together free of charge.

Retrieved from "https://runescape.fandom.com/wiki/Auguste?oldid=24562419"
Community content is available under CC-BY-SA unless otherwise noted.