Automatons are some of the strongest non-boss creatures found on RuneScape. They have some of the best rare drops in game (their level 85 gloves) and all of their drops are noted/stackable (apart from RDT), allowing you to stay there for long periods of time without banking due to no inventory space. 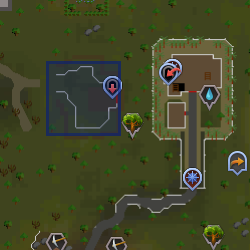 Upon asking the Guthixian High Druid for a teleport (you can also right click him), you will end up in the large chamber of the room. The Automatons are not aggressive despite their high combat level, so do not worry about being instantly killed upon arrival.

There are seven Automaton Guardians in the middle, along with eight Automaton Tracers and Automaton Generators on both sides. You can go deeper from the path in the middle to find two of each Automaton listed above. The elevator also gives a quick way out if you need to leave. You can also leave by the opening that you used to reach Guthix during the quest.

Each Automaton has extremely accurate attacks that can hit up to 800. They also have a special attack where they pound the ground, dealing rapid and heavy damage of their combat style which cannot be partially protected by Protection Prayers, Deflect Curses and Anticipation. It can be interrupted by using a stun on them and, as long as it hits, you won't take any damage from the attack for as long as the stun lasts. Debilitate can reduce the damage taken from the special attack.

Automatons have extremely high combat stats, along with high life points for their level.

It is recommended that your weapon is at least level 75, as the automatons have very high defence and anything lower will have trouble hitting them.

For melee, it is recommended to kill the Tracers, or Guardians if using Turmoil. Due to having to be within melee distance users will be the most vulnerable to the automatons' special attack. With drygores it is very easy to kill the automaton before it can perform the special attack. This is also possible with Chaotic weapons but the kill speed is slower, meaning the risk of being hit by the special attack is significantly higher. To kill them quickly, you should chain together high-hitting threshold abilities such as Assault, Slaughter and Destroy if dual wielding. Damage from the special can be reduced significantly if Debilitate is used, also, If you do get caught in the special attack, it is possible to interrupt it with a stun and prevent further damage.

It is not recommended to fight the Generators without Turmoil as the attack bonus provided with Piety is generally not sufficient to hit consistently.

For rangers, it is recommended to kill Generators. Automaton Generators are weak to arrows specifically, therefore the noxious longbow is slightly more effective than ascension crossbows. A royal crossbow, dual wielded chaotic crossbows or zaryte bow (attuned crystal bow) will also provide fast kills, provided that potions are used. Rangers will be able to avoid the automatons' special attack completely as long as they stay at least 3 squares away. Players who want to kill Tracers can also use ranged, as it does decent damage and allows them to keep their distance and avoid the special attack. It is possible to safe-spot the guardians with ranged, but this is not recommended as even with level 80 weapons it is nowhere near as effective as using magic.

For mages, it is recommended to kill Guardians. They are weak to fire and blood spells. Guardians are only able to use melee and can be safe-spotted, making it possible to kill them indefinitely without food or prayer. A safe spot can be behind a pillar near the chamber entrance, along the wall near the elevator or near the entrances to the rooms where the bosses were fought in the quest. The Impact ability can stun them (providing you are using level 75+ weapons) all the time, and you should be able to kill one before the stun's effect wears off. You can kill the Tracers or Generators with magic, however killing the two will be slightly longer and ineffective due to their increased magical resistance.

If mages opt not to safe spot Automaton Guardians, it might be suggested to err on the side of caution and possibly wear Ganodermic armour for the increased defence.

If sixth-age circuit isn't used, then a ring of wealth is suggested due to the increased drop rate of gloves.

Blood equivalents of the 3 Dungeoneering necklaces (arcane, brawler and farsight) and fury are recommended, but aren't ideal due to the cost incurred in acquiring said necklaces over their slightly inferior base versions.

Use of tier 90 armour isn't encouraged given the general profitability of Automatons if a glove drop is not acquired.

Prayer potions and Soul Split are recommended if melee or ranged is being used, as this can reduce or negate the need for food entirely, especially if using ranged. Players without access to Soul Split should bring food and/or use Regenerate, Guthix's Blessing or Enhanced Excalibur. Players with 95+ Prayer should use Turmoil, Anguish or Torment, depending on their combat style, to achieve the fastest kills possible.

Automaton Guardians are renowned for dropping the exclusive static gloves; formidable magic gloves that are currently the best non-degradable magic gloves in the game. Guardians attack with only melee which gives the opportunity for the player to safespot them if they are available safespots. Being melee-based monsters, they are weak to magic and in particular fire spells.

A good action bar setup for a mage would be:

Use the best spell you can - it is a good idea to take advantage of their fire spell weakness by using fire surge or Blood Barrage. The way to be able to camp here without using supplies is going by the rule of trying to keep away from the Guardian being able to touch you. This is a similar strategy with Char during her rage mode, although much less dangerous if contact occurs. The use of the curse Torment is recommended due to its magic boosts which speeds up kill rates significantly. Using air surge with an Armadyl battlestaff can prolong killing Guardians as the staff gives an infinite supply of air runes and being a higher tiered weapon making it a good choice.

Auras such as inspiration aura and invigorate can speed up the use of higher levelled abilities. Runic Accuracy is a magic-based aura which makes spells more accurate and another good choice to help speed up kills. A Scrimshaw of Magic can be used to increase critical hit chance as another aid for faster kills.

Once a Guardian has been attacked, it should be lured behind a storage wing's lower wall and then proceed with the kill while maintaining at least three squares of distance away from the Guardian to avoid being hit by the pulse attack which is deadly.

Be careful when using the abilities Chain and Dragon Breath as they can hit other Automations nearby - including Automaton Tracers and Automation Generators - causing them to attack the player. Use abilities accordingly on the Guardian until they are killed and repeat the process of luring them behind an obstacle to safely kill them without taking damage. If a player is heavily damaged they could use the curse Soul Split and/or Blood Barrage to recover lost life points.

Due to the fact that you can safespot these monsters and thus take no damage, power armour is recommended, as the damage boost can help speed up kills and lead to more profit per hour.

Familiars may be used; Wolpertingers are a good choice if Overloads are not being used for the magic boost to increase accuracy and damage dealt. A Vecna Skull can be used as the lowest alternative to a continuous magic level boost item. For players who are new to killing Automatons, using a storage familiar such as Pack yak may be a good idea to carry extra food for inexperienced hunters. Familiars such as the Moss titan and Unicorn stallion which heal when their scroll is used can also be a good choice for inexperienced players although note that the usage of a summoning scroll will deplete adrenaline by 10% every time one is used.

Retrieved from "https://runescape.fandom.com/wiki/Automaton/Strategies?oldid=24929903"
Community content is available under CC-BY-SA unless otherwise noted.