Start a Wiki
This article is about the NPC found in Draynor Manor. For the pet, see Ava (pet).
OS 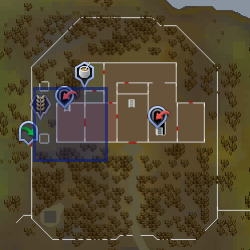 Ava starts the Animal Magnetism quest. She is the assistant to Professor Oddenstein. She also creates Ava's attractor and Ava's accumulator for the player at the end of said quest. If a player loses the device, it may be claimed back from her for a fee of 999 coins. She can also upgrade the Attractor to Accumulator for 75 steel arrows, but that can only be done if the player's Ranged level is above 50. During the Do No Evil quest, Ava's accumulator can be upgraded to Ava's alerter. Ava's alerter has a higher magic, ranged, attack and defence bonus than the accumulator, but has the same range level requirement. It is used to detect buried metal items in the desert.

She resides in the "secret" room on the ground floor at the southwest part of Draynor Manor, just behind the hidden door next to the bookcase. To get to her search the candle sconce on the west wall of the study, revealing a "secret door" which takes the player into the bedroom. Ava will not appear until the player has completed the Ernest the Chicken quest. To exit the bedroom players must pull the switch, opening the door and allowing the player to leave.

Ava also has a small shop, Ava's Odds and Ends, that sells various feathers, arrows, and arrowheads. However, players must have completed the Animal Magnetism quest before they can access this shop. This is handy if a player needs to quickly buy the 75 steel arrows needed to upgrade their device.

Ava is also a witness in the Ernest v. Professor Oddenstein court case.

Retrieved from "https://runescape.fandom.com/wiki/Ava?oldid=25382069"
Community content is available under CC-BY-SA unless otherwise noted.