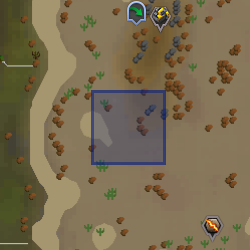 The Man found in Al Kharid Mine is a non-player character who plays a big role in the Family Crest quest. During the quest it is revealed that his real name is Avan Fitzharmon. After the quest, he can turn family gauntlets into goldsmithing gauntlets. This is free if players have not previously chosen an enchantment for the gauntlets, but if they have, it will cost 25,000 coins. The gloves boost the Smithing experience gained when smelting a gold ore into a gold bar from of 22.5 to 56.25. This is a very popular way to train Smithing, since it is a good balance of cost and speed.

Retrieved from "https://runescape.fandom.com/wiki/Avan?oldid=25381792"
Community content is available under CC-BY-SA unless otherwise noted.