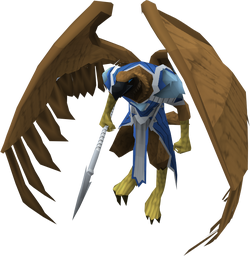 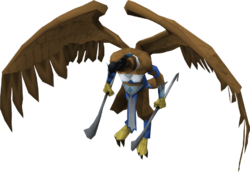 Aviansie (sometimes referred to as Aviantese) are avian creatures found in the southern section of the main chamber of the God Wars Dungeon, and can also be found within Armadyl's Eyrie, which is also found within the dungeon. Like the other creatures within the dungeon, they can be found fighting for their god Armadyl, engaging in combat against the followers of the other gods. They are often killed for their adamant bar drops.

As they are airborne, they are completely immune to melee attacks, and can only be damaged with either ranged or magic attacks. If you attempt to attack an aviansie with a melee weapon anyway, the message "The aviansie is flying too high for you to attack using melee." will appear, and the aviansie will become aggressive and start attacking you.

Armadyl spiritual rangers, warriors and mages are considered to be aviansie when on a Slayer task.

Like followers of the Bandos encampment in God Wars Dungeon, aviansie have a chance of dropping the three abilities (Devotion, Sacrifice and Transfigure) which were released with The Bird and the Beast world event. To obtain the abilities LootShare doesn't have to be enabled, how ever it will increase your odds significantly. These abilities are individual drops, however you may receive multiple abilities in a single kill.

An aviansie flying in place

Concept art for the updated aviansie