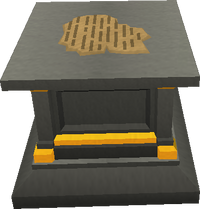 The Azdaran Fragment is the oldest surviving document in Keldagrim, the capital of the Dwarven Realm.[1][2] The Fragment itself was created in the Age of Kings, in what would have been the Third Age. The fragment can be found inside the Records Chamber, although only the one sentence can be made out.

At the time of its creation, the Fragment was intended to convey the message that Keldagrim's monarchy was the ideal governing body of the city, rather than the Consortium that served as an advising group. Following the death of King Alvis in roughly 1699 of the Fourth Age, the Consortium became the city's rulers.

Dwarves in favour of a monarchy, such as the Keldagrim Monarchist Society, have since cited the Fragment as an argument against the Consortium's rule. It is not until the events of the Rise of the Red Axe quest series, however, that the monarchy is re-instated.

After Birthright of Dwarves mining the statues in the Ancient Keldagrim ruins north of the Keldagrim library will give additional fragments that when put together create the complete Azdaran document.

The following text is transcluded from Transcript:Azdaran Fragment.
No band of petty councilors can preserve this city through its darkest days — only a king.

Retrieved from "https://runescape.fandom.com/wiki/Azdaran_Fragment?oldid=25380592"
Community content is available under CC-BY-SA unless otherwise noted.