Bal'lak the Pummeller is one of the Kal'Gerion generals summoned to this realm by Bilrach and is a boss of Daemonheim guarding floors 33 through 35, requiring a Dungeoneering level of 65 to encounter and fight.

Bal'lak uses melee and magic. He also has a special attack that will damage everyone around him in melee range two times in one attack, whilst also briefly disabling their protection prayers. Bal'lak has very high life points and low defence for his level, but his defence rises over time causing him to take significantly less damage.

Bal'lak's defence level is shown at the top part of the screen as an orange bar, which begins to fill at a steady rate when players are in the boss room. If it fills completely, damaging him will become impossible. As Bal'lak is attacked he will split rifts in the ground and cause bubbling pools of noxious fumes to appear on the floor. Each pool causes rapid damage to players standing in the 3x3 square surrounding it, similar to the effects of poison. Bal'lak should be lured near one of these pools to weaken his defence, with each being able to reduce up to 30% of his defence bar. However, it drains players' defence as well

The defence bar determines how much your accuracy is reduced, as you will still deal damage if you land a successful hit on Bal'lak. Occasionally, multiple puddles are found clustered together. If the player can successfully lure Bal'lak over the cluster of puddles, his defence will be reduced at a relatively faster rate.

While protection prayers and deflection curses are frequently disabled by this boss, he cannot deactivate any other prayers and curses.

Standing under him for too long will often result in 300 life points of damage.

The ideal strategy for higher level players is to ignore the pools and just attack him. The boss should be dead before its defence becomes an issue.

Bal'lak will often target an individual player and attack them for most of the fight. A strategy for teams is to agree before entering that whichever player Bal'lak targets has the responsibility of leading him towards these pools. By this method a good team can stop his defence ever rising past 30% and will find he dies rather quickly.

A safer but slower strategy is to continually attack him (without worrying about his defence bar) and then use Gatestone Teleport if his defence bar rises close to maximum. Waiting outside of the room reduces the bar, allowing players to enter the boss room again and continue the offensive. All party members must leave the boss room for the bar to reset. 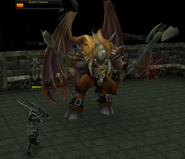 Facing the twin hammers of the mighty Pummeller! 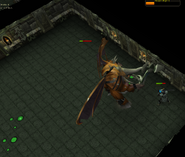 Luring Bal'lak onto one of his rifts.
Click an image to enlarge

Rrrraargh!
When using his special attack

Retrieved from "https://runescape.fandom.com/wiki/Bal%27lak_the_Pummeller?oldid=24925930"
Community content is available under CC-BY-SA unless otherwise noted.