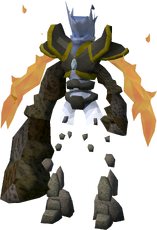 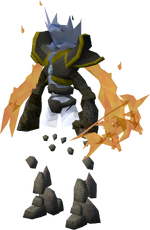 The Balance Elemental is an enemy fought during While Guthix Sleeps. It was created by Guthix by fusing five druids and their elemental and temporal powers together to protect the Stone of Jas after Guthix ended the God Wars in the Third Age. It could be linked to the Chaos Elemental, according to Reldo in an edition of Postbag from the Hedge. It speaks about the player as if they have already met, and the player has already died.

The Balance Elemental is capable of using all three styles of attack, switching styles periodically. To counter this, Protection prayers are capable of blocking all damage dealt by the elemental.

The Balance Elemental is fight-able as a class C boss monster in the Dominion Tower minigame if the player has completed While Guthix Sleeps.

The Balance Elemental was created by Guthix from a combination of the first World Guardian Aeternam, and four powerful elemental druids, Ria, Thera, Rief, and Atrew, at the Standing Stones[1], some time prior to the Stone of Jas taking up its residence in the Ancient Guthix Temple. Guthix tasked the elemental with guarding the stone until they were near to death, at which time they would be returned to their home plane with his gratitude and blessing.

During the fight against it, the elemental claims to have known the player well, describing their funeral as a "lovely" event, and that they would know more than anyone that the good die young. On death, it recites the speech Guthix gave when it was created, and disappears, having served its purpose.

The Balance Elemental lives in the temple where the Stone of Jas is found. Lucien appears immediately after defeating it and finally, at the end of the quest, Tormented Demons are fought. According to its duel card, the Balance Elemental exists in multiple dimensions at once, a state known as straddling.

The Balance Elemental uses all attack styles, and changes appearance for each: A giant stone fist signifies that it is attacking with melee, a flaming bow ranged, and spikes of water protruding from its head mean magic attacks. It also uses a stat draining attack which is a rock-like missile.

The Balance Elemental will appear from the Stone of Jas once a player touches it. It begins the fight using Ranged, but will readily switch to other attack types. Like players, there is a small delay when it switches combat styles, and it usually uses that same attack for 3-4 hits in a row. If you die during the battle, your gravestone will appear next to Movario and Darve in the Tears of Guthix cavern.

It is advisable to fight it using Ranged or Magic (be careful however, the stat drain will affect your spell casting) and get it stuck on some of the rubble around the room so that it cannot use its melee attack. The Stone of Jas itself can be used as a safespot, and a familiar can be used to block as well. If the Elemental's melee attack is disabled in this way, switching prayer is a lot easier, with the bow and the blue spikes being clear indications of which prayer to use. Food must then only be eaten to replenish the health lost through the stat draining attacks.

As of 1 February 2013, the Balance Elemental is quite easy to defeat by a high-level player, and only hits around 200 damage or so.

One tactic is to immediately run to the other side of the Stone of Jas as soon as the Elemental appears and then completely out of its target range. This will allow time to plan a strategy as the player will no longer be targeted and the elemental will simply stand in place allowing for positioning before the first strike.

Players should wear hybrid armour, such as Dragon Rider armour, with at least 200 dragon bolts (e) or better and a dragonfire shield. For equipment carry one prayer potion, one super restore, one super attack, Saradomin brew and super strength. Use a one-click teleport for quick escape. Have a demon slayer crossbow or better ready to go and fill the rest of the spaces with sharks.

For the melee weapon use a dragon 2h sword or better.

Before touching the stone, drink a dose of each super potion. Summon the Elemental and turn on Protect from Magic (keep it on).

Jump to crossbow when he switches to melee, but beware as he still has his rockthrowing ability. Have your Prayer always on, as a well landed melee attack will always hit between 3000-5000. If this is the case don't panic, eating food will give the Elemental time for another melee hit that will most likely kill you, so turn your Magic or Ranged prayer on, hide from the Elemental to be out of its melee range, and eat.

If a player has a Ranged level of at least 70 (players with lower stats may find it a bit longer, but all the easier) players should bring around 150 ruby bolts (e) (more if the player has lower stats) and 100 diamond bolts (e), along with a super ranging potion and super restore potions. Saradomin brews may be quite effective, but do not use them during the battle against the tormented demons since they will reduce your boosted stats from the Stone of Jas. Sharks will do enough, however. A demon slayer crossbow should suffice.

Immediately after the cutscene of the elemental appearing, do not click "Click here to continue", simply run to the other side of the stone. The elemental will not target you, and wander aimlessly. Drink your Saradomin brew, restore potion and ranging potion (in that order to maximise boost), equip ruby bolts(e) and attack the Balance Elemental. Killing the Elemental this way used to be easy , but since the EoC it has a damage cap of 4500, a bit less than 10% of its health. It can be still done , but will likely take more than 5 minutes and without prayer the Elemental will crush you in a similar way than TzTok-Jad and now its Defence is sightly higher so shots are somewhat likely to miss without at least 80 Ranged.

This method has been tested within the Dominion Tower. It cannot be done in the quest as the Elemental will detect your current prayer after 2 attacks and change its battle style

A player who has the required Prayer level to use all protection prayers or Deflect curses, and is skilled at switching prayers, can defeat the Balance Elemental without taking any damage.

See While Guthix Sleeps for more extensive details on how the elemental fights and how to fight it.

Retrieved from "https://runescape.fandom.com/wiki/Balance_Elemental?oldid=24925913"
Community content is available under CC-BY-SA unless otherwise noted.