Start a Wiki
This article is about those in Evil Bob's Prison. For those from Christmas 2011, see Balloon animal (2011 Christmas event).

Balloon animals were encountered during the Prison random event. Players pulled the lever besides the barriers to get an image of the balloon animal that they are supposed to pop. Players then popped at the least three of these to obtain the prison keys inside them. In this random event you did not get an emote nor a costume.

The varying characteristics between each balloon animal can be easily distinguished from their horns, body width, and tail length. 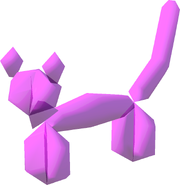 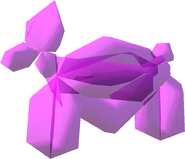 There's also a chance that an animal may escape through the door, but that is extremely rare. Today they can be found tormenting Prison Pete at the prison in Port Sarim.

There is a chance to obtain a follower pet version of each balloon in the Falador Party Room by pulling the lever and popping balloons.

Retrieved from "https://runescape.fandom.com/wiki/Balloon_animal?oldid=24925276"
Community content is available under CC-BY-SA unless otherwise noted.