The Bandos Throne Room is a good place to earn money. The statues respawn quickly, and (apart from the Ourg statue) don't hit particularly high (max hit 200 from the Ourg Statue). They have several relatively worthwhile drops: gems from sapphire to diamond are all common drops, Mystic earth staves are sometimes dropped, and the Granite mace is only an "uncommon" drop - expect to see about 2-4 in a full inventory after a trip. A full inventory from a trip here will usually sell for 150-200k (16 January 2010). Even if you keep a few gems for yourself (e.g. for some Crafting) the Bandos' Throne Room is still an excellent source of money for how safe it is. 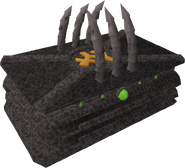 Retrieved from "https://runescape.fandom.com/wiki/Bandos%27s_throne_room?oldid=6641167"
Community content is available under CC-BY-SA unless otherwise noted.