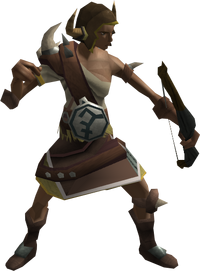 Bandosian ambushers are followers of Bandos, associated with The Bird And the Beast. There are two types.

The first type appears at Bandos-controlled sites that have a spider hole built on them. They appear whenever an Armadylean caravan stops there, and attack any bodyguards that are still alive.

The second type can appear anywhere within the world event PvP area that an Armadyl-aligned player is found, and will attack them. Other Armadylean players may attack them and attract their attention.

The third kind of ambushers are those that take place in skirmishes, using melee or ranged weapons to fight armadylean battle-mages, bodyguards and ambushers.

Their maximum health would be lowered according to the player's level upon being attacked. Their combat stats also seems to be adjusted to the weapon the player is wielding, meaning they would deal little damage if the player is unarmed. Players can encounter up to three ambushers a day.

Ambushers generate adrenaline as they fight, and can use abilities. Typically, the first thing they do is attempt to stun their target with Backhand, then either use Punish to deal extra damage if they succeed, or Smash to disable prayers if they fail, or if the target breaks free.

When a player is attacked by a Bandosian ambusher, the following message is seen in their chat box:

Retrieved from "https://runescape.fandom.com/wiki/Bandosian_ambusher?oldid=24922404"
Community content is available under CC-BY-SA unless otherwise noted.