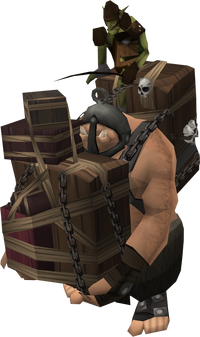 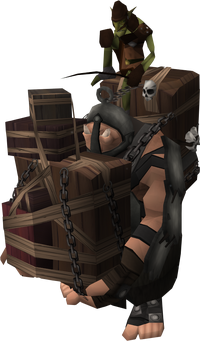 Bandosian caravans are units for Bandos which collect divine energy in sites around Asgarnia and Misthalin during the world event The Bird and the Beast. At the sites, the caravans use Divination to siphon energy wisps, creatures created from the Anima Mundi that were created as a result of Guthix's death. The divine energy is used to power the weapon, the Scarecrow, found atop Bandos's Tower, with which Bandos plans to use to kill Armadyl.

Once the caravans are full, the convoy despawns and returns to the base tower. However, if the caravan is attacked and killed before completely harvesting the energy, the caravan retreats to the base towers with whatever they have harvested thus far. Players may obtain sacred metal fragments as well as weapon override components, regardless of whether the caravan is successful in the harvesting or is killed in the process. Enemy caravans are not attackable during their journey to the destination site. The caravans only become attackable when they are stationary: when they are at the intermediate sites, and finally at their destination site. The caravans can only be attacked after the bodyguards have been killed.

After the Escalation vote during phase 4 of the event, Bandosian players had opted for a tougher caravan. Thus, one of the caravans was exchanged for an upgraded version with 50% extra life points.

Retrieved from "https://runescape.fandom.com/wiki/Bandosian_caravan?oldid=24922282"
Community content is available under CC-BY-SA unless otherwise noted.