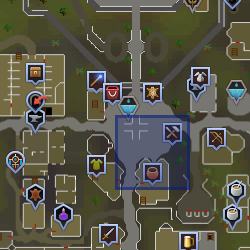 Bang Ersenmash was an NPC that was released with the Diamond Jubilee event, found in Varrock Square. He sold items for the Jubilee in his shop, Exotic Foods.

These items were tradeable to other players but could be sold on the Grand Exchange. The items disappeared after the event was over.

Retrieved from "https://runescape.fandom.com/wiki/Bang_Ersenmash?oldid=20094240"
Community content is available under CC-BY-SA unless otherwise noted.