A banner showing your support of Zaros.

The Banner of Zaros was released with the God Emissaries update. A player may select the options of Contact Emissary, Power, and Check Progress. It is used to show a players devotion towards Zaros and is mainly cosmetic.

Its cosmetic look will change as the owner completes task sets provided by Soran. Like all banners, the banner obtains the ability to boost skills for 30 minutes once per day based on the set completed:

Skill boost - temporarily boosts one of any non-combat skill excluding Agility by 2.

Note that other items providing a visible level boost, such as spicy stew or tea in a Player-Owned House, will not stack with the banner's effects. You can't drink the best tea (+3) and use a +2 banner boost to get a +5 Construction bonus - it will simply default to the stronger bonus or more recent negative modifier, in this case +3 for the tea. 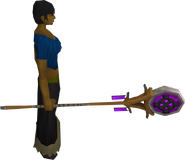 Tier 1 of the Banner of Zaros 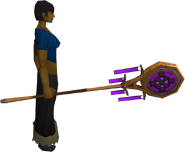 Tier 2 of the Banner of Zaros

Tier 3 of the Banner of Zaros

Tier 4 of the Banner of Zaros
Click an image to enlarge
Retrieved from "https://runescape.fandom.com/wiki/Banner_of_Zaros?oldid=14552106"
Community content is available under CC-BY-SA unless otherwise noted.