View source
watch 02:17
New Pokemon Games - The Loop
Do you like this video?
Play Sound
RSCOS
This article is about the village. For the music track, see Gunnarsgrunn (music track). 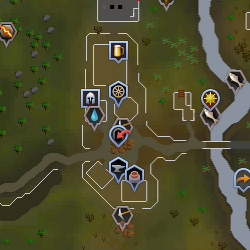 Barbarian Village, actual name Gunnarsgrunn as learned during Gunnar's Ground and also known as Barbarians Tribes, is a small village along the River Lum, inhabited by barbarians. It is south of Edgeville, west of Varrock and north of Draynor Manor. It is one of the smallest inhabited locations in all of RuneScape. It was one of the first towns released.

In years 42-62 of the Fifth Age the Fremenniks conducted a series of armed invasions of Kandarin, Asgarnia, Misthalin and the Imcando dwarven territory of Ice Mountain in an effort to stop the creation of rune stones by humans. Many Fremenniks held the view that magic was a gift best left to only the gods and, under the leadership of the warlord Gunnar, the people of Rellekka and other outlying villages took up arms, intent on stopping the production of magical stones.

The crusades eventually faltered and the Fremennik were forced to settle in what is now known as the Barbarian Village. Gunnar initially planned to regroup and continue the attacks on Misthalin. However, the descendants of the original Fremenniks still live in a relative peace within the confines of Gunnarsgrunn.

On 21 September 2010, the quest Gunnar's Ground was released. This was the first quest ever to take place in Barbarian Village. The quest replaced the former Romeo & Juliet quest.

Barbarian Village has two main entrances; east and west, and a few smaller ones. The western entrance has a road leading to Falador, while the eastern one leads to Varrock.

Both free and P2P players can directly teleport to Barbarian Village if they have the skull sceptre, a reward from the Stronghold of Security.

While some NPCs differ from one another, most look, act, and speak the same. The men wear helmets with horns sticking out of the sides and armour seeming to be made of hide they also wield large 2 handed swords or spears. The women wear two pieces of loin cloth placed on their bodies so that they appear to be wearing light clothing made out of animal skin, they wield either nothing or some form of hastas. The only NPC who inhabits the town that speaks proper English seems to be Litara. She looks the same as all the other female NPCs of the village, yet she uses complete sentences and spells most of her words correctly.

Peksa's Helmet Shop is the only non-members store where players can buy helmets, other than Valaine's Shop of Champions on the first floor of the Champions' Guild, which sells black full helmets.

Peksa sells and buys varieties of helmets, ranging from bronze to adamant, medium and full helms.

There is also a perpetually burning fire in the middle of the shop which players can use to cook the fish they caught in the fishing spot just outside the town's walls.

The Long Hall can be found in the north of the town. Free beer and cooked meat respawns on the tables. However, barbarians and Haakon the Champion are inside the bar, so low level players are taking a risk to go in. There is a single ranged Barbarian inside or around the hall. Also Chieftain Gunthor, the current leader of the settlement can be found here.

This is a popular area to train ranged and Magic combat, using the tables for cover then moving out to collect arrows and drops as well as collecting the beef on the nearby table for food.

North of the eastern entrance of the town is a watch tower where players can find Hunding, who tells players about the tribe's history, as well two treasure chests.

At the centre of the town is the Barbarian Village mining site, a mine with coal and tin ore. It's considered by many as a poor mine, as there are not many ores. It's also one of the few mines within a town or city. There is a mining site just south of the Village with clay. As there is a well in the centre of the village and a pottery house just north of the site, it is an ideal location for crafting urns and other low level pottery.

The Stronghold of Security can be reached through a hole located in the mining area. The dungeon is open to all players, purposely designed to help players know more about security in RuneScape. It is a medium-sized dungeon that gives rewards for making it to the centre of each level, including four new emotes and a choice between 2 unique pairs of boots. Originally, to pass, players had to answer a series of account-based security questions which are asked by the sentient doors. Players would not be allowed to pass through the doors until they answered the questions correctly. Players can now pass freely through the doors without having to answer an account-based security question, if they list their age as over 13. Various monsters live in the dungeon, including goblins, minotaurs, and skeletons.

To the east of Barbarian Village are some fishing spots in the river. Players can fish with feathers or bait at these spots. This is one of the most popular fishing spots in the free world because of its relative proximity to the bank in Edgeville where players can store their fish as well as the Stronghold of Security and the Edgeville Dungeon. It is also very popular for power fishing players, fish scavengers, and fish beggars. A good way to obtain trout or salmon is to trade bait for food instead of begging for it if there are multiple beggars around. Cooks may reside here to use the free fish that are dropped by the power fishing players.

To the east of Peksa's Helmet Shop is a small house with a spinning wheel. Players here can turn wool into balls of wool or they can spin flax.

To the south of the house with the spinning wheel is a house with a potter's wheel. Players can use clay with this and the potter's oven nearby to craft small items.

In the hut with the potter's wheel is a Barbarian anvil. This anvil is used to make spears and hastae using Barbarian smithing. This anvil cannot be used for normal smithing, and is members only.