He works the city's metal. 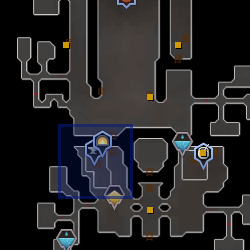 Bartak is a Dorgeshuun cave goblin responsible for overseeing all metalworking in the subterranean city of Dorgesh-Kaan.[1] Bartak can be found in his home near the southernmost part of the city, near the city's cave goblin wire machine.

Smithing is extremely important to the Dorgeshuun, as much of their infrastructure and many of their goods are made from the refined ore extracted from the cave network surrounding Dorgesh-Kaan. As a result, Bartak's role within the city is an important one, as all metal processing must go through him. This is reflected in his home, which is fitted out with advanced smithing and crafting machinery. He is evidently a very experienced blacksmith, and uses a unique three-pointed anvil, an open furnace, and a variety of complex tools in his work. Though the tools Bartak uses can be observed on the wall, he will intervene if players attempt to use them. Because Bartak is so heavily involved in the development of the city, he is usually very busy, and acts jumpy when spoken to.

The city's only public furnace and anvil can be found in Bartak's home, and a sandpit and wire machine can be found directly outside it. However, because the furnace is fragile and Bartak fears that the injury of a human could damage the Dorgeshuun's relation with the surface,[2] he will prevent players from using it to smelt ore. They can, however, use it to make jewellery and glass, which is made easier by the availability of the sandpit and the abundance of swamp weed in the nearby Dorgesh-Kaan South Dungeon. The wire machine's close position to Bartak's home implies that he may own it, and players with 44 Thieving can steal from it.