I could get a beer from him 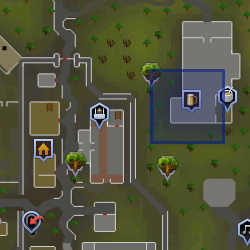 The Bartender at the Jolly Boar Inn in Varrock is an NPC serves the purpose of selling beer to players. If asked, he will tell players about another bartender who thinks RuneScape is a computer game.

He is the person referred to in the Cryptic Clue Fest's Clue 2 released on the 27 November 2009 regarding the 2009 Thanksgiving event. He tells us to level up our lower skills because Mod Mark H requested forum users to stop being impatient about the release of the second clue and instead do something else on RuneScape.

Retrieved from "https://runescape.fandom.com/wiki/Bartender_(Jolly_Boar_Inn)?oldid=24562936"
Community content is available under CC-BY-SA unless otherwise noted.